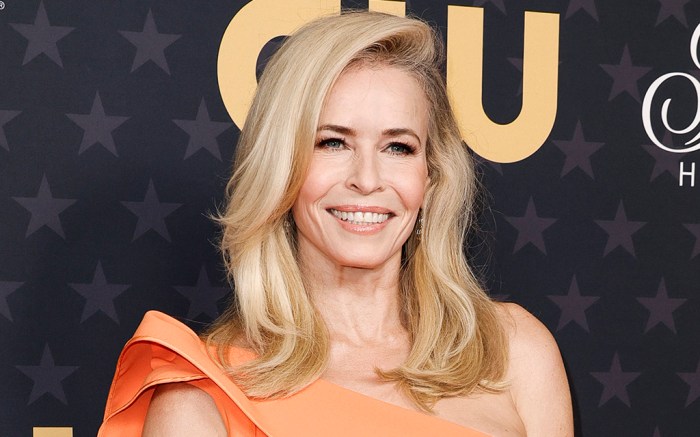 Chelsea Handler hit the red carpet at the 2023 Critics’ Choice Awards at the Fairmont Century Plaza  in Los Angeles wearing a bright pop of color and pointed toe pumps. Handler is the host of tonight’s festivities.

The “Fun Size” actress wore a sleeveless bright orange gown featuring an asymmetrical neckline and a cascading skirt that transitioned into a short train that trailed behind Handler as she traversed the carpet. The producer accessorized her ensemble with a chunky gold bracelet fitted with orange gemstones and matching dangling earrings.

On her feet, Handler sported gilded pointed toe pumps that complimented the gold accents already present in her outfit. The shiny pair boasted 3 to 4 inch heels and sparkling uppers that made Handler’s every step shine.

Before she hit the carpet, Handler was photographed while rehearsing for tonight’s awards, the photo posted to the program’s official Instagram account only hours before the ceremony. The comedian was casually dressed for the rehearsal in an all-black ensemble and boots.

The “Chelsea Lately” host wore a breezy black button down blouse, the collared top tucked neatly into  fitted black denim. On the accessories front, Handler seemed to have stacked on a few dainty gold chain necklaces, the addition dressing up her ensemble.

Handler stepped on stage in shiny black pointed-toe ankle boots fitted with short stacked block heels and a sleek silhouette. A go-to shoe style for many, ankle boots are extremely versatile shoes that can feature a variety of heel styles. Boots that stop at the ankle can be practical, dressy, casual, minimal, showy and more. Chelsea boots, combat boots and booties are all types of ankle boots.

Besides hosting the 2023 Critics Choice Awards, Handler is also executive producing and starring in a television adaption for Peacock of her best-selling book, “Life Will Be the Death of Me.” She will also guest-host “The Daily Show” in February. In addition to her accomplishments in the entertainment industry, the stand-up comedian has been making waves in the fashion world as well, having recently made an appearance in Kim Kardashian’s Skims campaign alongside big names like Brooke Shield, Cassie, and Becky G.