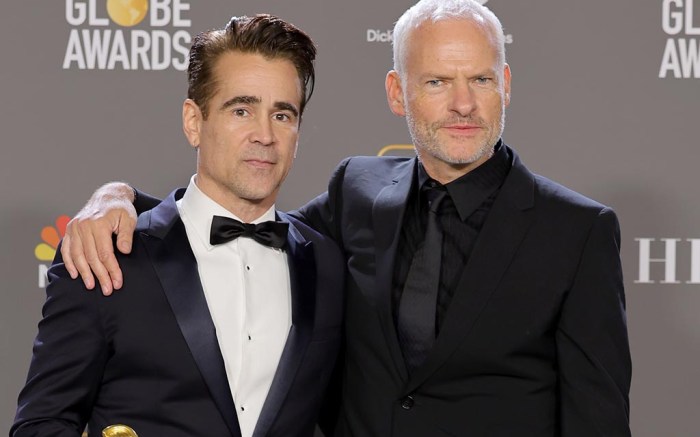 Colin Farrell was sharply suited for the 2023 Golden Globes. The actor won the Best Actor in a Musical or Comedy award for his leading role in the film “The Banshees of Inisherin.”

While hitting the red carpet at The Beverly Hilton in Beverly Hills, Calif., after accepting his award, Farrell posed with Martin McDonagh in a sharp black tuxedo. His classic set featured a long-sleeved jacket with silky lapels, as well as a white button shirt cinched with a black bow tie.

When it came to footwear, Farrell also opted for a classic finish with a pair of black patent leather loafers. His glossy set featured almond-toed uppers with classic thin laces, completed with thin soles and short blocked heels.

Farrell went viral after assisting “The White Lotus” star Jennifer Coolidge to the stage, where she accepted her Best Supporting Actress in a Limited Series/Anthology or Motion Picture Made for Television trophy for her viral role as Tanya McQuoid in the HBO drama.