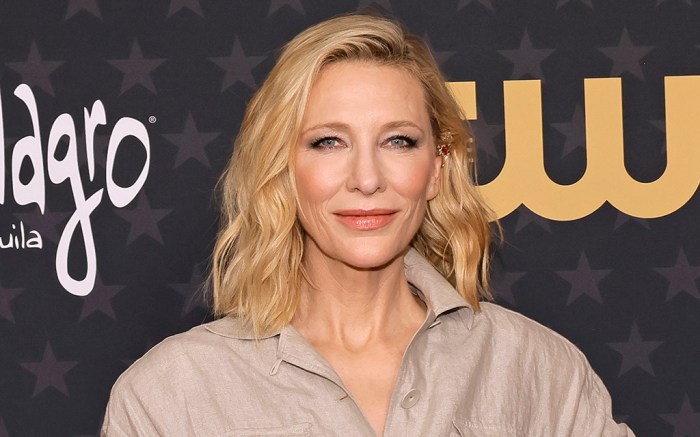 Cate Blanchett made a chic appearance at the 2023 Critics’ Choice Awards tonight in Los Angeles. The “Ocean’s 8” actress wore a taupe Max Mara set, designer accessories, and sharp pumps. Blanchett is nominated for Best Actress for her work in the musical drama “Tár.”

The “Don’t Look Up” star was dressed in a long sleeve button-up top that was French tucked into a matching floor-length maxi skirt. The skirt created a mermaid-like silhouette and featured a tattered hem that gave the set a grungy feel.

As for accessories, Blanchett wore a gold scalloped arm cuff mimicking the look of fish scales, a statement ring and a gilded ear cuff all from Louis Vuitton jewelry. As for her hair, Blanchett wore her blond mid-length locks in loose waves.

Opting for a sharp addition to her ensemble, Blanchett wore a pair of matt black pointed-toe pumps. The pair appeared to have thin heels, around 3 to 4 inches, triangular toes, and a sturdy construction that offered the award-winning thespian a more comfortable experience. The shoe style is a classic beloved by many celebrities, Blanchett included.

Blanchett tends to gravitate towards more minimal styles. She is a fan of classic black and white looks, sophisticated monochromatic outfits, frothy floral gowns and sweet pastel suits. The “Stateless” alum has a shoe wardrobe that consists of platform pumps, heeled boots, statement sandals and a range of loafers.