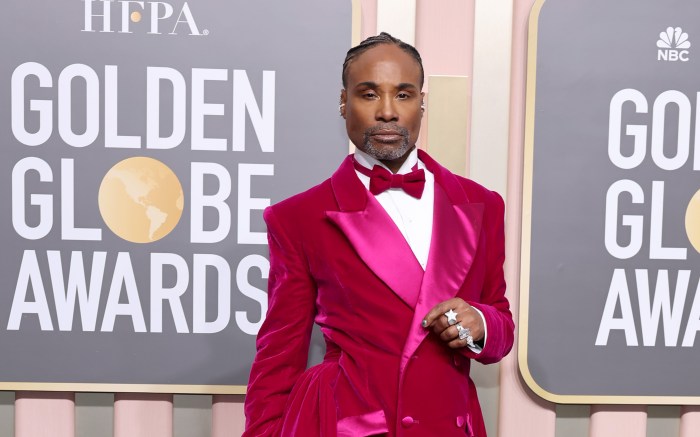 Billy Porter brought the power of pink to the 2023 Golden Globes, were he will present the Carol Burnett Lifetime Achievement Award to Ryan Murphy.

While hitting the red carpet at The Beverly Hilton in Beverly Hills, the “Pose” star wore a vibrant gown by Christian Siriano — a revamped replica of the viral gown he wore to the 2019 Oscars. His fuchsia velvet piece featured a flowing ball skirt in a double-breasted silhouette, complete with long sleeves. A slim silk-lapeled bodice, matching bow tie and white collared shirt finished the piece. Porter also accessorized with layered diamond earrings.

“He asked me to come in the Oscar dress,” Porter told Variety of Murphy’s outfit request. “I couldn’t really do that, so Christian Siriano whipped something else together for me.”

When it came to footwear, Porter’s shoes of choice couldn’t be seen. However, it’s likely the star slipped into a pair of towering platform pumps or boots, as he’s previously worn to formal red carpets in the past.