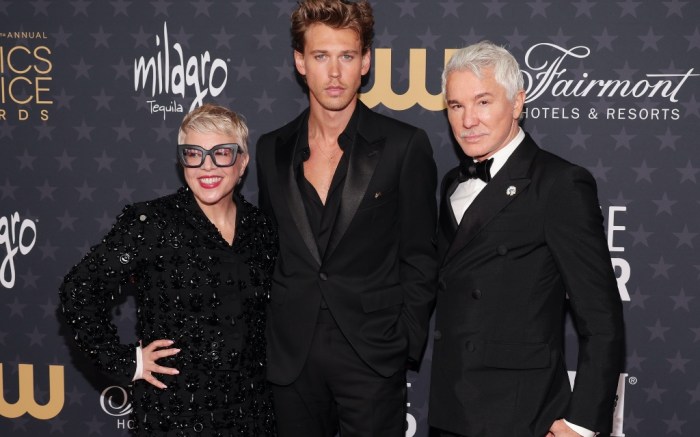 Austin Butler went dark for the 2023 Critics’ Choice Awards in Los Angeles. The actor is nominated this evening for Best Actor for his titular role in Baz Luhrmann’s “Elvis.” This was Butler’s first public appearance since the passing of Lisa Marie Presley, the only daughter of Elvis and Priscilla Presley.

While hitting the red carpet at Fairmont Century Plaza in Los Angeles, Butler arrived with Luhrmann and his wife, costume designer Catherine Martin — both also respectively nominated at the awards for Best Director and Best Costume Design for “Elvis.”

For the occasion, Butler wore a jet-black Celine suit with sharp satin lapels, layered atop an unbuttoned black shirt. His minimalist, monochrome Hedi Slimane-designed attire was finished with a thin gold pendant necklace, as well as a gold lapel pin.

When it came to footwear, Butler’s suit was complemented by a set of black leather boots. His almond-toed style was finished with a pair of short heels, likely totaling 1 to 2 inches in height. The set added a streamlined base to his outfit while providing a chic alternative to the formal loafers or oxfords traditionally worn on the red carpet.