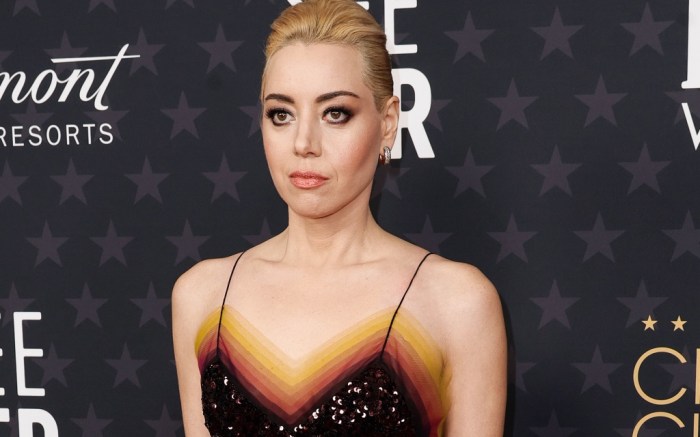 Aubrey Plaza sparkled at the 2023 Critics Choice Awards tonight in Los Angeles. The actress, who starred as Harper in HBO’s “The White Lotus,” will serve as a presenter during the ceremony.

While hitting the red carpet at Fairmont Century Plaza in Los Angeles, Plaza posed in a custom Louis Vuitton gown. Styled by Sophie Lopez, her sleeveless ensemble featured a column silhouette with a sharp V-shaped neckline crafted from ombre yellow and red tulle.

Covered in light-catching burgundy sequins, the dress was sleekly finished with a dynamic thigh-high side slit. Layered gold bracelets and a set of gold and diamond huggie earrings finished Plaza’s outfit.

When it came to footwear, Plaza’s outfit was finished with a versatile set of platform sandals. Her black satin style featured thick soles topped with thin ankle and toe straps. Providing added elevation were thin stiletto heels totaling at least 4 inches in height, giving Plaza a slick height boost while on the carpet — and also allowing her gown to take center stage in the process.

Plaza is starting 2023 with a busy schedule. She is currently filming her newest project, Francis Ford Coppola’s sci-fi movie “Megalopolis,” and will host “Saturday Night Live” on Jan. 21. Recently, Plaza has become a notable figure on red carpets and also in the fashion world. She has attended fashion shows of brands like Thome Browne, Opening Ceremony and Moschino.