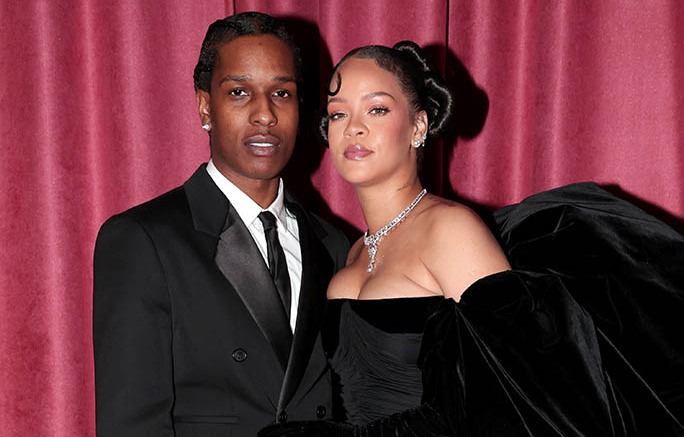 Rihanna and A$AP turned the 2023 Golden Globes into a date night on Jan. 10. The sought-after superstar duo skipped the red carpet, but managed to make a fashionable appearance amongst the audience at the annual ceremony.

Rocky and Rihanna were a coordinated couple while arriving at The Beverly Hilton in Beverly Hills, Calif. The new parents both opted for black attire to celebrate Rihanna’s nomination for Best Original Song for “Lift Me Up” from “Black Panther: Wakanda Forever,” alongside Ludwig Göransson, Ryan Coogler and Temilade Openiyi.

Rocky looked dapper for the occasion, wearing a tuxedo by Bottega Veneta. The Grammy-nominated rapper’s ensemble included a sharp blazer jacket, matching trousers and a white button-down shirt. The “Dope” actor complemented his outfit with a black tie and chunky patent loafers.

Riri brought her slick style to the event in a sweeping black velvet gown — a custom haute couture design from Schiaparelli. Designed by Daniel Roseberry, the musician’s ensemble featured a bustier silhouette with a flowing skirt and voluminous stole crafted from bonded silk velvet. The dynamic piece was paired with a diamond statement drop necklace and crawler earrings. The Fenty founder completed her look with Giuseppe Zanotti’s Indigo Strap Sandals.