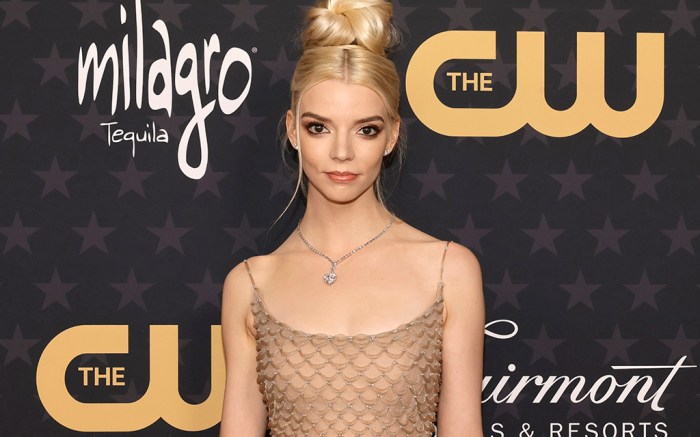 Anya Taylor-Joy made her way to the red carpet at the 2023 Critics Choice Awards tonight in Los Angeles. The actress, who is one of this year’s presenters at the ceremony, arrived in a stunning Dior Haute Couture dress and Dior Beauty.

“The Menu” actress’ ensemble was a rather see-through one, comprised of a strappy bodice and an A-line skirt, every inch of the garment adorned with a scalloped pattern dotted with crystals. The dress was made of sheer nude fabric, showing through to what appeared to be a nude bodysuit.

“The Queen’s Gambit” star accessorized her ensemble with a dazzling diamond bracelet and matching rings fastened with even larger diamonds and gemstones by Tiffany & Co.

On the footwear front, Joy opted for silver strappy sandal heels. The heel itself was skinny and long while the toe was rounded, making for a dainty construction. Crystalized straps ran across the tops of Joy’s feet and around her ankles, securing the style in place.

On red carpets, Taylor-Joy often wears creations from brands like Oscar de la Renta, Rodarte, Dior, and Vera Wang. Aside from being an award-winning actress, she has also strived to make a name for herself within the fashion industry, having starred in campaigns for labels like Dior, Viktor & Rolf, and Tiffany & Co.