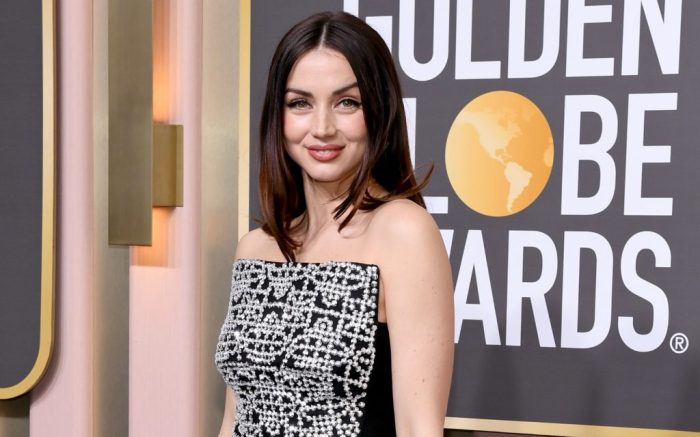 Amongst a sea of well-dressed attendees, including A-list artists like Laverne Cox, Angela Bassett, and more, Cuban-Spanish actress Ana de Armas stood out at the 2023 Golden Globes Awards in a one-of-a-kind gown.

The “Blonde” actress wore a custom black-and-white Louis Vuitton strapless bustier gown. The ensemble was conceived as a two-piece dress with a structured front panel embroidered with 800 sequins in a 3D geometric pattern. The back of the dress was made in pleated black silk featuring a small train. The dress took a total of 150 hours to complete and 25 meters of silk was required for the back alone.

To balance out the intricacy of the embroidery, Armas‘ ensemble was accessorized with two diamond bracelets. The “Knives Out” actress’ brunette locks were straightened and parted distinctly down the middle.

Armas’ makeup was kept simple with a fresh-faced complexion, bold, arched brows, a small cat-eye liner, and a nude-pink lip.

On the red carpet, Armas typically goes for a sleek and minimalistic-style shoe. The actress has been seen wearing a luxurious range of footwear designers including Christian Louboutin, Rossi, Sarah Flint, Aquazzura, Jimmy Choo, Piferi, and many more.