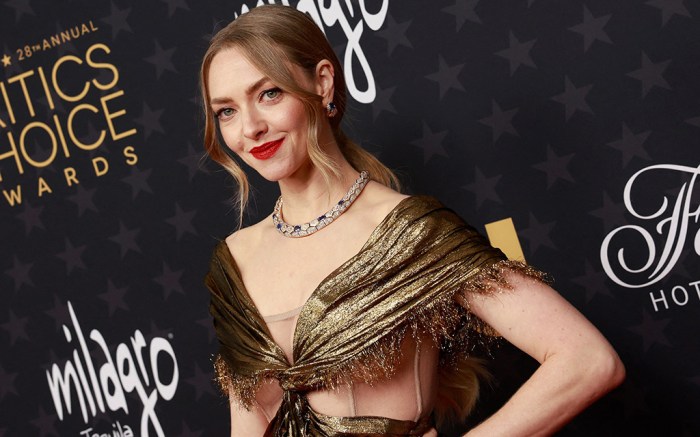 Amanda Seyfried served up gilded glamour at the 2023 Critics’ Choice Awards tonight held in Los Angeles. The “Mama Mia!” actress wowed the crowd in a glittering Christian Dior gown and hidden Stuart Weitzman heels. Seyfried won the award for Best Actress in a Limited Series or Movie Made For Television for her work on the Hulu series “The Dropout.”

Seyfried’s golden dress was a floor-length off-the-shoulder style, the bodice trimmed with gold tinsel that gave the garment a whimsical vibe. The bodice transitioned into a twisted mid-section with cutouts on either side followed by a cascading skirt. The dress was made of a metallic gold fabric that appeared as if it were molten thanks to the material’s high-shine finish.

The “Mean Girls” star sported an elegant and eye-catching Cartier necklace encrusted with diamonds and what appeared to be sapphires. Along with the statement piece, Seyfried wore chunky gold studs, also from Cartier.

Seyfried’s style is sharp and classic, often including pointed pumps and platform sandals by Christian Louboutin, Francesco Russo and Prada. When off-duty, her wardrobe frequently features low-top sneakers by Adidas, Nike and Converse. Birkenstock and Ancient Greek Sandals flat sandals are also a key part of her casual wardrobe as well.