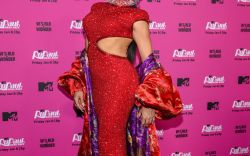 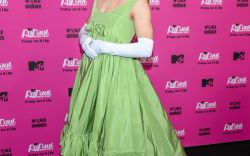 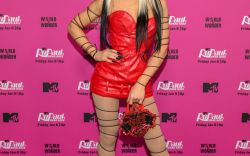 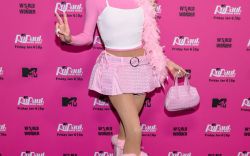 A feathered red dress with crystal embellishments, a dark brown wig, a sparkling necklace and matching dangling earrings created one of the most viral outfits of the week. The model? Controversial GOP Rep. George Santos.

The freshman Republican congressman made headlines in recent weeks after images surfaced on the internet of him wearing the now-famous red dress after his former friend and Brazilian drag performer Eula Rochard said he was living as a drag queen in Rio de Janeiro.

Initially, Santos denied the claims but later confirmed the authenticity of the images to TMZ, adding he “was not a drag queen” and just “had fun at a festival.”

Rochard deems Santos’ response as a “good excuse for him” to deal with the bad press surrounding his name. “He never performed as a drag queen. Not on a professional level, because he wasn’t good enough. But he would go out in full drag,” the Brazilian artist exclusively told FN.

Rochard said Santos’ introduction to drag began at her house in the Niteroi suburb of Rio de Janeiro, where the GOP member used to live with his mother in 2005. Santos was then known as Anthony Devolder — or Kitara Ravache in drag.

“He was an extremely delusional gay boy, completely broke,” she recalls. Rochard says Santos would help organize her drag closet and hang out with her friends at her place. He allegedly got involved with the GDN (Niteroi Diversity Group). “This group would fight for laws against homophobia, the legalization of same-sex marriage and other LGBTQ+ rights,” she explained.

During this time, Santos would reportedly wear dresses, wigs, lashes and over-the-top makeup to party with his friends. Rochard questions his taste in fashion but gives him credit for the Representative’s catwalk. “He was great in heels. He sashayed really well, but he could only handle 4-inch heels. More than that was too much for him,” she said.

“He wasn’t a bad kid, but he was a liar. He has always been a liar. At Niteroi’s first Pride March [2005] he wore a poorly-made black dress and told everyone that he was working for Rio de Janeiro’s best clubs. But only top drag queens would work in those clubs. It was about glamour and he didn’t have that in him.”

After Niteroi’s first Pride march, Santos announced to his friends that he was moving to New York to work as a dog walker. The news reportedly surprised them since Santos often bragged about how his father was a rich immigrant in the U.S., Rochard told. “Your dad is rich, your mom is a cleaning lady and you’re going to walk dogs? Cut the crap, girl!” she said.

In 2008, Santos was back in Brazil and, as Rochard recalls, used his money to buy expensive fabrics attempting to design scene-stealing gowns. “He made a very nice dress for Niteroi’s Pride March that year and then he entered the Miss Rio de Janeiro Gay beauty pageant, which is very competitive. The queens are stunning! Of course he didn’t win! He only won a ‘slap in his face.’”

Rochard ended up losing touch with Santos when he moved once again to the U.S. Decades later, in 2023, she saw on the news a story about the first openly gay elected Republican member of Congress who was also the son of Brazilian immigrants.

Santos made headlines after being caught lying on his resume and falsely claiming his mom died on 9/11 in New York (she’s currently alive), his education and employers, among other accusations. He also supported Florida’s Parental Rights in Education bill, the “Don’t Say Gay” bill, which bans discussion of LGBTQ issues in classrooms between kindergarten and the third grade.

Rochard said she was “gagged and shocked” when she learned about Santos’ new endeavors. “I aged one thousand years. She is a Republican, conservative, working to create laws against drag queens, the LGBTQ+ community… I couldn’t believe it,” the Brazilian queen said. “If he was here, all the gays would throw eggs and rotten food at him. Americans are too nice.”

This week, Santos got into a Twitter fight with “RuPaul’s Drag Race” star Trixie Mattel. “Tell him to discuss with a Brazilian queen instead and tell Trixie to call me. I’ll get a translator and spill the tea with her. He is scared of me,” Rochard joked, before revealing what she would tell Santos if she had the chance: “Wake up! And get ready, because the Americans are looking for your VHS. It will leak!” According to her, the tape shows Santos’ full performance during the Miss Rio de Janeiro Gay pageant.