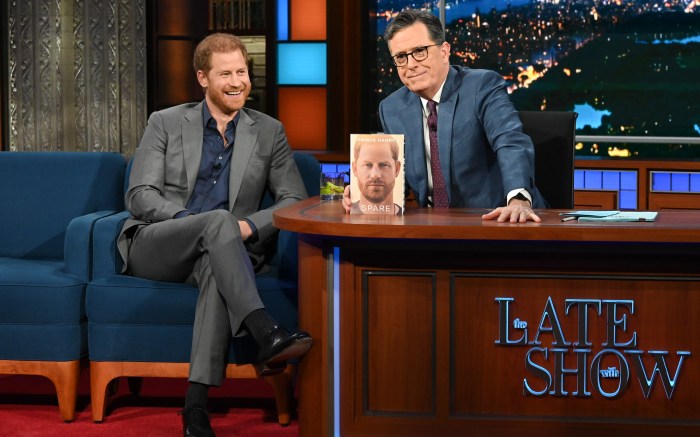 Prince Harry stopped by CBS’ “The Late Show with Stephen Colbert” last night to promote his new memoir “Spare,”  in which he shares intimate details about his private life as a royal and his wife Meghan Markle‘s relationship with the press. During his late-night show appearance, Harry took a shot of tequila with host Stephen Colbert and met actor Tom Hanks backstage.

For the occasion, Harry took to formal dressing. The youngest son of King Charles III with the late Princess Diana donned a graffiti suit featuring a tailored blazer with matching trousers. He completed his outfit with a navy button-down shirt.

Harry accessorized his look with a beaded bracelet in black, blue and green. He also wore a trio of charms affixed to a black cord around his neck. The royal revealed during the interview that two of them were engraved with son Archie and daughter Lilibet’s cardiograms. “I’ve got my kids’ heartbeats, which my wife gave me,” he explained. The third one was given to him by a friend in Botswana and it has the tiger’s eye on it.

Continuing with his formal style, Harry slipped on a pair of black heeled oxfords, giving his outfit extra inches. The prince stands tall at 6-foot-1, and in heeled shoes, he dwarfed Colbert, whose height is 5-foot-10. His lace-up leather oxfords featured a glossy finish with a rounded toe silhouette.

Harry also joined Hanks in a humorous skit during the episode. In the scene, Colbert waits in a hallway with two trumpets on a red carpet. “Whoa, whoa, whoa, stop, stop! Stephen, not needed, but thank you, I appreciate it,” said Harry, just to find out that the fanfare was actually for the American actor.

“Spare” was officially released on Tuesday. According to Penguin Random House, the first day of sales topped 1.4 million copies, a record pace for non-fiction from a company.