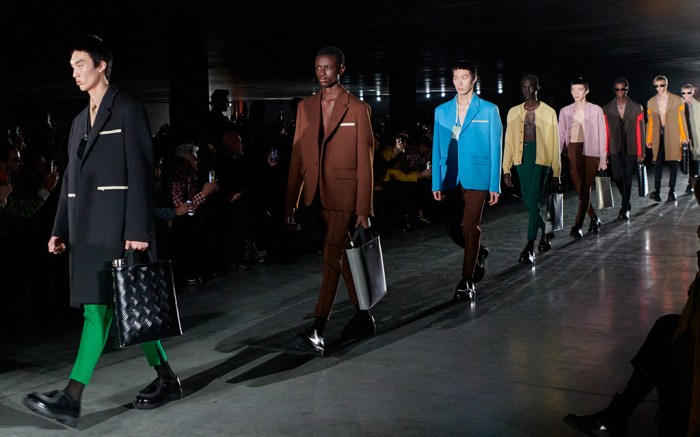 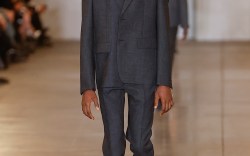 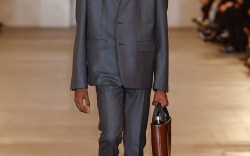 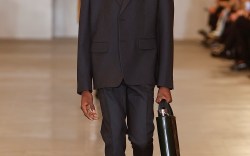 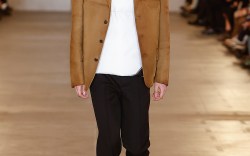 The stripped back collection this season revisits Prada’s modern and often minimalist approach to fashion, a feeling that was duplicated at its show space at Fondazione Prada. Conceived by AMO, the firm stripped the space down to expose its concrete shell and installed a movable ceiling that raised slowly to alter the scale of the room from intimate to grand – unveiling Art Deco chandeliers when fully raised.

The austere collection “echoes the garments themselves, elongated or abbreviated,” according to the show notes, entitled “Let’s Talk About Clothes.”

“Reductionist tailoring, graphic shards of print and knit, laid bare on skin,” the house added, giving a nod to the pointy collars and snippets of sweater buttoned into jackets like dickies.

Save for a few of those pointy collars, this was an entirely print-free collection. Tailoring was slim, which we come to expect from Prada, the counter to the voluminous sets we’ve seen throughout most of Milan.

Outerwear was the standout with classic woolen topcoats spiced up with four white horizontal zips or vivid taping along the sleeves and yoke. One piece even echoed notes of a pillow, which happened to be this season’s show invite. New bags also made an appearance, from a new tote and small crossbody bag.

For footwear, the Italian house is keeping with its chunky footwear theme with two new styles on the runway. The first, a wallabee-style leather boot in many colorways was seen across multiple looks throughout the show as well as a new chunky fashion sneaker.