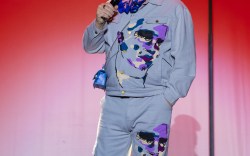 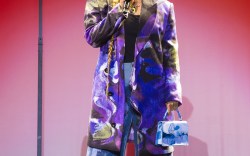 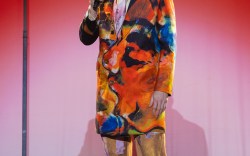 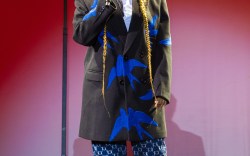 “We’ll see how it goes, it could fully bomb,” Dillane said. “But that’s also what’s cool about some of the fashion shows I do; they’re risky.”

Saturday night’s performance, and collection, reflects Dillane’s take on fashion: “It should stay creative, fun, and lighthearted.” According to the show notes, this collection “plays the KidSuper playbook masterfully” with brand codes like art, colors, prints, collages on everything from classic streetwear to animated tailoring and coats. The show also teased two exclusive upcoming collaborations with jewelry brand Pauer and shoe brand Stuart Weitzman.

According to the show notes, the footwear collaboration was co-created by Stuart Weitzman head of design Edmundo Castillo and Dillane‚ and brings together the shoe brand’s signature silhouettes with select pieces of Dillane’s artwork.

Worn by Banks, the final result is a capsule of “wearable works of art that nods to Stuart Weitzman’s vision of creating shoes that meld artisanal Spanish craftsmanship and precisely engineered fit to empower women to stand strong,” the notes said. The collection is slated to launch on stuartweitzman.com and in select Stuart Weitzman boutiques around the globe on Feb. 22, 2023.

As for the other footwear, colorful loafers and boots featuring Dillane’s signature artwork also made an appearance.