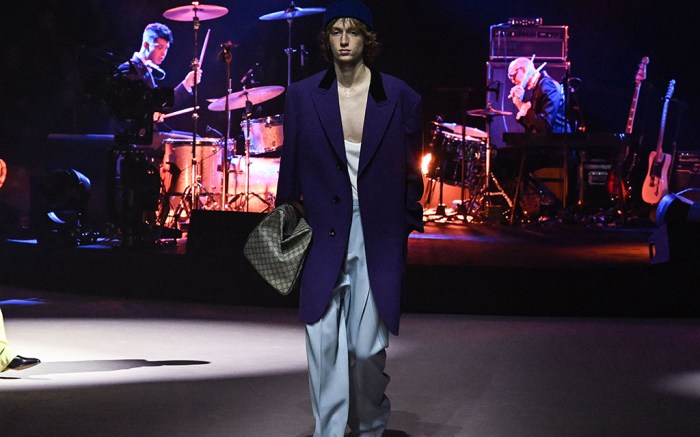 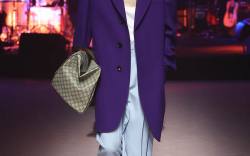 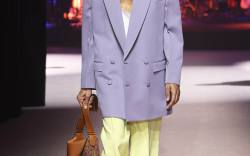 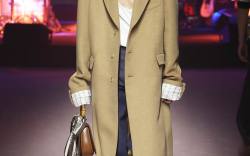 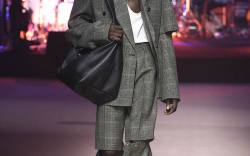 The cast of all-male models walked on beige carpeting around a spherical stage to a live performance by Marc Ribot’s Ceramic Dog, playing for guests including actor Idris Elba, “Wednesday” star Percy Hynes White and South Korean singer and actor Kai — a notable departure from the typical Gucci front row with faces like Harry Styles and Jared Leto.

The collection itself, designed by Gucci’s in-house team, was also a departure from Michele’s hype-driven maximalist aesthetic, with a range of items inspired by the designers who preceded him, from Tom Ford to Frida Giannini.

This could be seen through the Crystal GG motif, a new lacquered interpretation of the house’s coated monogram canvas from the 1970s, which is applied to workwear coveralls as well as bags and shoes in various colors.

Other archival moments can be seen in sportswear informed by Gucci in the 1980s, while motorcycling garments pay tribute to archival pieces from the early 2000s.

According to the show notes, Gucci said this collection is focused on the “archetypes of the classic gentleman’s wardrobe,” which it aimed to redefine through “artisanal luxury amplification” and the “subversive lens of improvisation.”

Silhouettes are oversized, particularly in the tailored clothing, which the brand noted was to enable “improvisation of styling.” This was echoed in suits with detachable elements, resulting in a sleeveless jacket or shorts.

The collection features a magnified reinterpretation of the Jackie bag softened in construction and adorned with the Piston Lock originally created by Tom Ford for Gucci, in faded pastel crocodile editions.

As for footwear, the collection sees the debut of a new soft, quilted motorcycle boot in a multitude of colors. Plus, the aforementioned Crystal GG canvas can be seen in a classic 1970s round-toe ankle boot. These styles appear alongside a heeled slipper, a corduroy Horsebit loafer and an updated fluffy Princetown slipper.