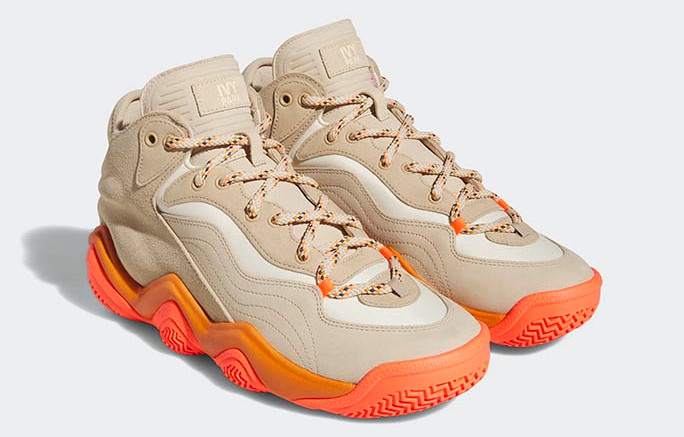 Adidas and Ivy Park are taking fans to the basketball court in their latest collaboration.

On Friday, the German sportswear giant and Beyoncé’s apparel brand announced the release of the Ivy Park Top Ten 2000 sneaker — a basketball shoe that is designed for the journey ahead. The Top Ten trainers first entered the basketball scene in the early 2000s and appeared on the feet of some of the best players in the game with cutting-edge tooling and technology.

Inspired by the excitement of the basketball scene in the early millennium and the possibilities of the future, the Ivy Park Top Ten 2000 marries the archival and imaginative tooling with a fashion-energized design twist.

The upper references a world of the future through a subtle juxtaposition of mixed materials with technical mesh. Cream and beige strike the curvy, bulging upper, which boasts a mesh, nubuck and suede construction dressed in a predominantly tan color scheme. The sneaker also incorporates a soft foam-fitting neoprene behind a molded heel piece. The tooling itself features a more traditional look, with a wave-like design in orange. Ivy Park branding also appears on the tongue tag and on the footbed.

The Ivy Park Top Ten 2000 sneaker retails for $200 and will only be available only on the Adidas Confirmed app. on Jan. 20.

The new sneaker collaboration comes after Adidas and Ivy Park released its Ivytopia collection in October. The collection offered a range of 52 items, including apparel, accessories and footwear that blended athleticism and fashion. The pieces were designed with materials like mesh, metallic spandex, French terry and stretch twills and are available in colors like off-white, silver, cyan, khaki and yellow.

PHOTOS: Click here to see all of the sneaker releases from the Adidas x Ivy Park collection in the gallery.