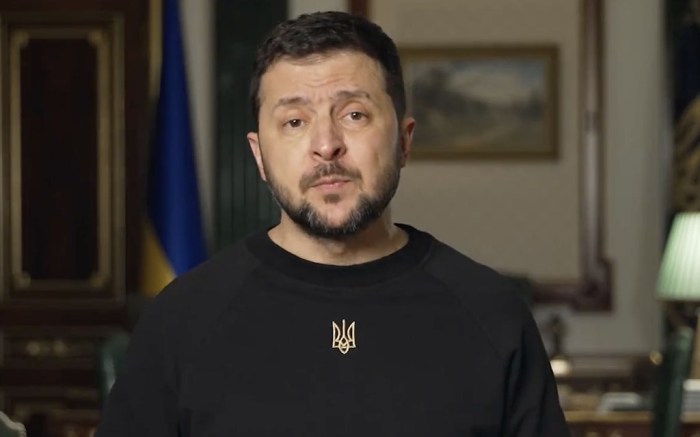 President of Ukraine, Volodymyr Zelenskyy made a virtual appearance during the 80th annual Golden Globes on Jan. 10. The politician was introduced by actor and film director Sean Penn.

President Zelenskyy arrived onscreen during the ceremony to deliver a message about the status of the Ukraine war. The former comedian and actor was casually dressed in a black crewneck sweatshirt by M-TAC. The M-Tac brand is the largest and most powerful brand of clothing and equipment in the military industry. Creation of high-tech products is a key element of M-TAC’s success. The brand’s clothing and equipment have been tested by today’s biggest
military conflicts.

“From the other-worldly courage of young Iranians rising up,” Penn said to the crowd. “To the ever persevering women’s movement of Afghanistan. We are reminded, in no uncertain terms, that the freedom to dream is not simply a human luxury but rather a human need that must be fought and sacrificed for. If the freedom to dream were a spear, I proudly present a human being who tonight represents that spear’s most honed tip.”

Zelenskyy then addressed the audience via recorded message recalling the start of the Golden Globes in the 1944. “The second World War wasn’t over yet, but the tide was turned, all knew who would win. There were still battles and tears ahead, it was then when the Golden Globes awards appeared to honor the best performers of 1943,” Zelenkyy said. “It is now 2023 the war in Ukraine is not over yet but the tide is turning. And it is already clear who will win. There are still battles and tears ahead, but now I can definitely tell you who are the best in the previous year, it was you. The free people of the free world. Those who united around the support of the free Ukrainian people in our common struggle for freedom.”