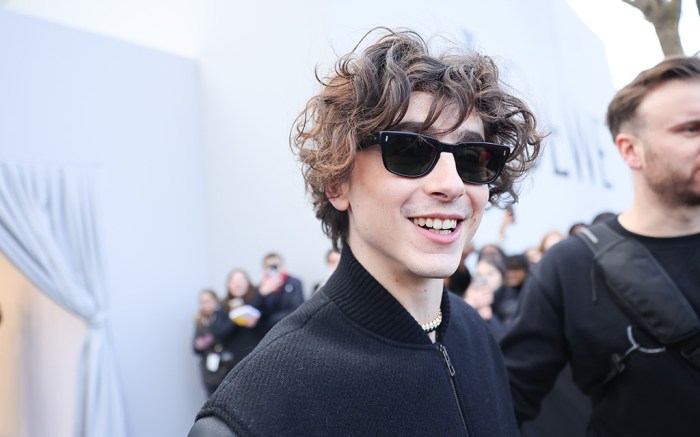 Clad in casual wears, Timothee Chalamet attended Loewe’s fall ’23 menswear show in Paris. Backed by his boyish charms, the “Call Me By Your Name” star was seemingly fully dressed in the Spanish designer, down to his all-white footwear.

Chalamet’s ensemble was comprised of a black shearling bomber jacket with leather sleeves in an oversized style, the outerwear layered overtop a classic plain white T-shirt. Going back to basics, the Oscar nominated thespian styled effortlessly cool dark blue joggers made of suede, also in a baggy style. Chalamet finished off his look with black sunnies.

To go along with white socks, Chalamet kept things casual and laced up white Loewe sneakers with elevated soles, white distressed denim uppers, and a bulky silhouette. The style is a popular pick for the New York native and a consistent go-to in his shoe line up. The style definitely looks cushy and easy to walk in, while the denim construction sets them apart from any other shoe.

When it comes to shoes, rocking a sleek boot on the red carpet is one of Chalamet’s signature styling moves. Glossy Chelsea and zip-up pairs with sharp toes are his most frequent go-to’s from high-end brands Berluti, Saint Laurent and Celine. When off-duty, Chalamet regularly slips into versatile white and gray sneakers. New Balance is one of the star’s favorites — he’s even worn limited-edition styled by the brand’s collaborations with Staud and Jaden Smith. Outside of those, he’s also been spotted in pairs by Louis Vuitton, Vans and Off-White.