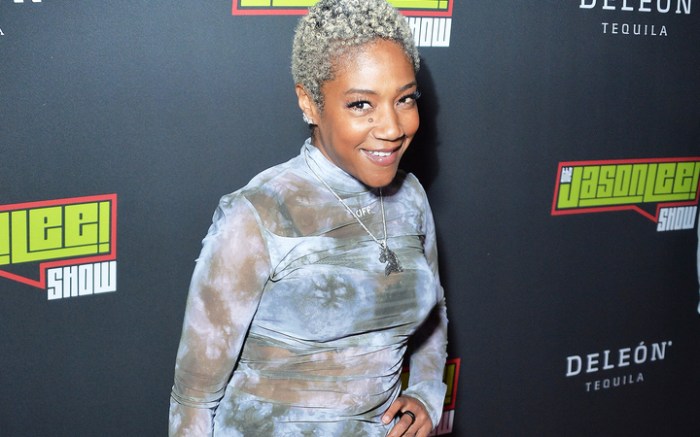 Haddish wore a casual outfit to the launch. The comedian paired an Off-White mesh tie-dye cropped top with leather pants designed with studs down the legs and zippers at the pockets. For accessories, she opted for an embellished unicorn necklace, stacked diamond earrings, and a medium leather tote by Helena Farrar. She wore her blond hair in a short curly pixie-styled cut and kept it natural with minimal makeup and glossy lipstick.

On her feet, she strapped on a pair of black leather utilitarian-inspired boots featuring a gold chain across the straps. Combat boots are an easy way to transition spring and summer pieces into fall and winter with ease. Haddish isn’t the only celebrity making a case for the silhouette. Take Tia Mowry’s iteration when she coupled a pair of Dr. Martens with leggings. Janet Jackson also tapped into this style by elevating a classic jumpsuit with the chunky version of the combat boot.

One thing about this “Girls Trip” star, she will always prioritize comfort — her style aligns with this ideology. She often looks to designers like Christian Siriano and Michael Kors for red-carpet events. When it comes to footwear, Haddish is no stranger to boots, strappy sandals, and chunky platforms. The last time she stepped out was for the “Emancipation” premiere, where she donned an MM6 Maison Margiela dress with Paris Texas Hollywood Crystal Stiletto Mules.