Sarah Jessica Parker Teases Aiden Shaw Return for ‘And Just Like That..’ Season 2 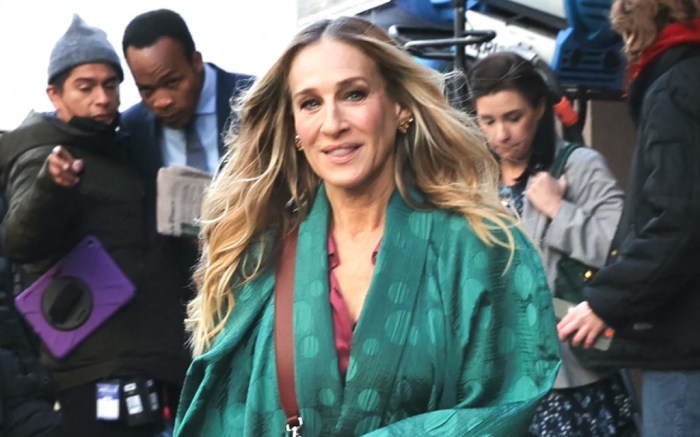 Warning: Spoilers below for “Sex And The City” and “And Just Like That..” Season 1.

Fans of HBO Max hit show “And Just Like That…” were abuzz on social media last night as new teaser photos for season 2 surfaced on Instagram. The slideshow post saw Sarah Jessica Parker, who plays Carrie Bradshaw, walking hand-in-hand with none other than John Corbett aka Aiden Shaw.

Parker was dressed colorfully in a hot pink ruffled shawl atop a purple button down dress. All layered up, the “Hocus Pocus” star wore what appeared to be a red plaid jacket that peeked out from underneath the shawl she wore. Finishing off the look strong, Parker paired her colorful wears with silver crushed velvet knee-high boots with block heels and pointed toes.

Aidan first appeared in season 3 of “Sex And The City,” acting as a furniture designer who becomes a major love interest for Carrie. Through trials and tribulations, and even a rather messy marriage proposal, the pair eventually went their separate ways. The now viral image has many fans torn. Is Carrie good for Aidan? Is Aiden too good for Carrie? It seems only time will tell. Grab your popcorn and Manolos, it seems we’re in for a wild ride.

Led by show runner Michael Patrick King, “And Just Like That…” follows its predecessor’s core characters Carrie (Sarah Jessica Parker), Charlotte (Kristin Davis) and Miranda (Cynthia Nixon) as they navigate life, friendship and loss in their 50s in — where else? — New York City.

The end of the first season found Carrie moving forward after the death of Mr. Big, Charlotte accepting the evolving identities of children Lily (Ang) and Rock (Swinton), and Miranda leaving Steve (David Eigenberg) for a relationship with Che Diaz (Ramirez). Costumes from the show’s debut by Molly Rogers and Danny Santiago made waves in the fashion world as well, resulting in many looks going viral before and after the first season aired.