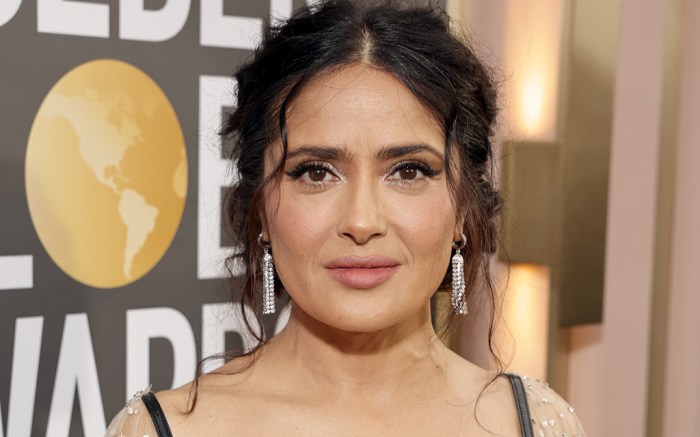 Salma Hayek skipped the 2023 Critics Choice Awards tonight, but she took to Instagram to show support to the  “Puss in Boots: The Last Wish” cast and crew. The film is nominated as Best Animated Feature Film of last year.

Hayek posted a photo with the film’s director, Joel Crawford, and some other artists in a sleek getup. She wore a form-fitting black bodycon dress and kept it simple with no jewelry, but carried a classic black tote.

Her glam consisted of a glossy hairstyle and natural makeup. The actress normally works with celebrity stylist Rebecca Corbin-Murray for red carpet looks like the 1920s-inspired crystal-embellished dress she wore to the Golden Globes last week.

While her footwear wasn’t visible, she likely accompanied the look with stiletto pumps to match the elegance of the dress. Stiletto pumps offer a timeless aesthetic and are an ideal match for any frock. The “Frida” star has a versatile shoe style ranging from platform boots to athletic sneakers. One thing about this star, she’s going to bring it to the shoe department.

Before the new year, Hayek sat down with Jimmy Fallon on “The Tonight Show” to talk about her pet owl, her World Cup obsession and her film with Antonio Banderas, “Puss In Boots: The Last Wish.”