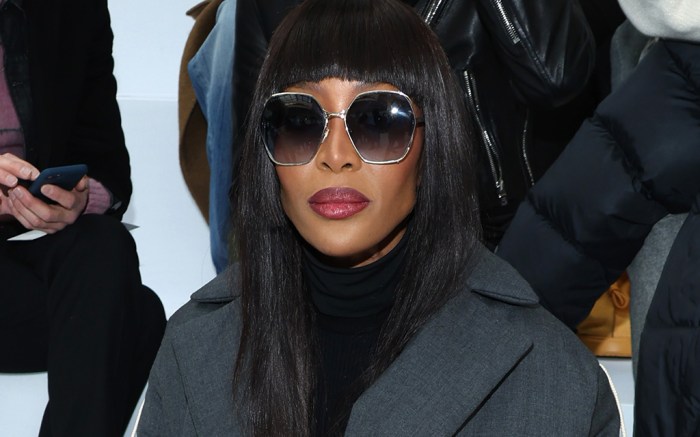 Comfortably outfitted, Campbell’s coat was gray and oversized, featuring lengthy sleeves and a quilted puffer jacket appearance. The inflated jacket was adorned with white rope which acted to outline the quilted nature of her outerwear, starkly contrasting the gray fabric beneath it. Underneath her jacket, Campbell wore what appeared to be a black ribbed turtleneck dress in a maxi style layered overtop extremely baggy dark wash denim jeans. The hem of her slacks were rolled up, giving the denim a causal appearance.

Although it was hard to see over the eclipsing hem of her pants, Campbell sported black pointed-toe ankle boots fitted with stacked block heels and a sleek silhouette. The sleek pair were made of patent leather, hence the appealing high-shine appearance.

When it comes down to footwear, Campbell’s shoe style ranges from sleek sky-high styles to practical digs. You’ll most likely find the legendary supermodel wearing flats or platform sandals — or even a sharp set of pointed-toe pumps for dressier occasions. Known for her impeccable style, Campbell’s shoes often complement her garments in a matching or neutral tone. Campbell is exemplary of timeless style and a wealth of fashion knowledge, making her a perfect candidate to spearhead a gala of this nature.

PHOTOS: Click through the gallery to see Campbell’s top fashion moments through the years.