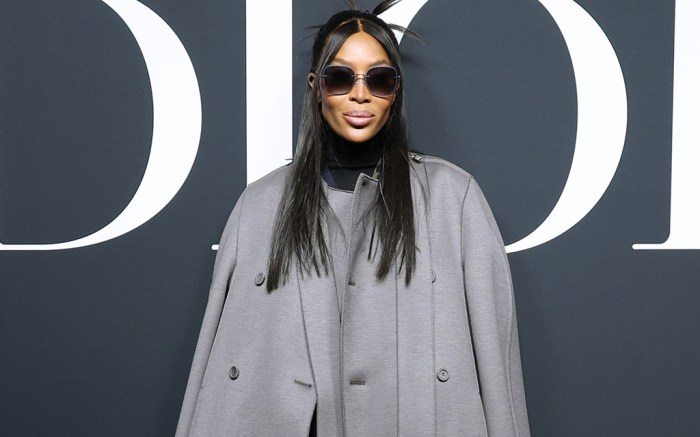 Naomi Campbell is among the list of celebrities who attended Dior Homme’s fall 2023 show during Paris Fashion Week today.

The supermodel wore an oversized trench coat with a double-breasted design, a single belt around the neckline and decorative straps with a button on the shoulders.

Campbell layered the trench over a black turtleneck that she coupled with wide-leg trousers. Her accessories included dramatic square sunglasses with a gray finish and a small Dior tote. For glam, she maintained her dewy makeup look with a glossy lipstick and styled her hair in a jazzy half-up, half-down hairstyle.

Campbell strapped on a pair of black leather shoes with a square toe to complete the look. As the queen of the catwalk, she has been seen in all types of footwear silhouettes. She recently took to Instagram to pay homage to the late fashion designer Vivienne Westwood and recall the time she lost her balance in Westwood’s “Super Elevated Gillie” towering heels. That didn’t stop the top model, though, as she often wears sky-high heels from brands like Valentino and Alexander McQueen.

The Dior Homme show garnered support from celebrities like “The White Lotus” actor Adam DiMarco, soccer star David Beckham and his son Cruz Beckham. Campbell was seen snapping it up on the front row with K-Pop singers Park Jimin and Jung Hoseok.