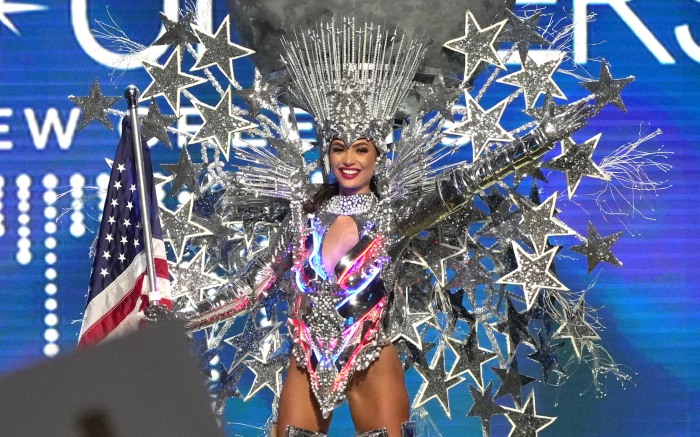 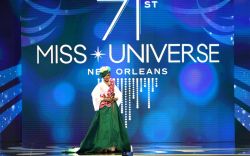 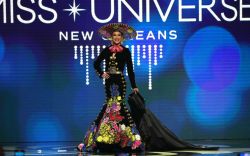 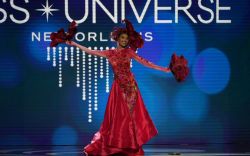 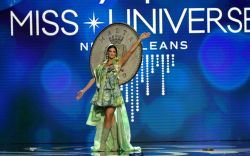 R’bonney Gabriel, the current Miss USA brought the moon and stars to the National Costumes phase of the Miss Universe competition in New Orleans on Jan. 11.

Gabriel, who is the first Filipina-American to win the crown in Oct. 2022, chose to showcase her hometown Houston’s space credentials for the competition. Designed by Patrick Isorena, her “Woman on the Moon” costume is an ode to NASA’s Artemis missions, which plan to land the first woman and first person of color on the Moon in 2024.

Gabriel’s costume included a massive moon-shaped crown and a long-sleeve bodysuit that was decorated with glittering stars that accentuated behind her. The one-piece garment also had a plunging neckline and lighting bolt accents at the center.

Completing the model’s look was a pair of silver metallic thigh-high boots. The silhouette featured padded detailing along the leg and a sharp pointed toe.

“On July 20, 1969 two US astronauts became the first humans to step foot on the moon accomplishing one of the most remarkable achievements in human history. Fast forward to today and women are involved more than ever in the Artemis program aiming to send the US back to the moon. As a Houston native, where the NASA space center is located, I am proud to be from a city working to send the first female to the moon. The purpose of this costume was to inspire women in all spaces across the universe to dream big, shoot for the moon and achieve something out of this world,” Gabriel explained on her Instagram.

The Miss Universe 2023 pageant celebrates international beauty, as well as a range of humanitarian causes from its contestants. Held on Jan. 14 in New Orleans, the event will find contestants from at least 80 countries competing for this year’s crown: a diamond and blue sapphire creation by Mouawad Jewelry, titled “Force for Good.”

The official Miss Universe show will stream for free on therokuchannel.com.

PHOTOS: See more of the Miss Universe 2023 National Costumes in the gallery.