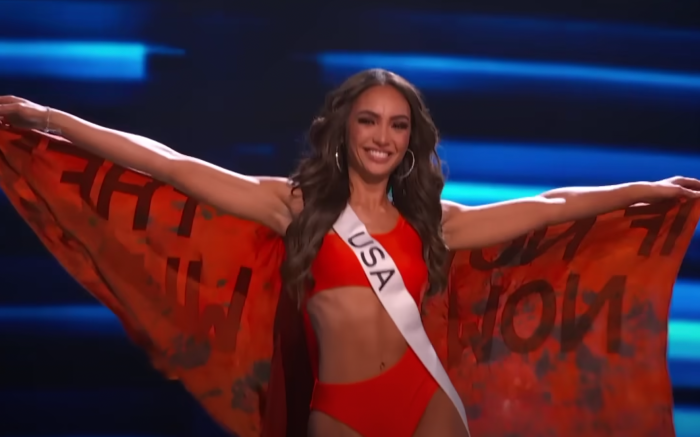 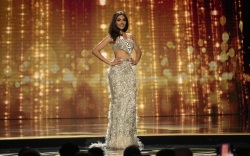 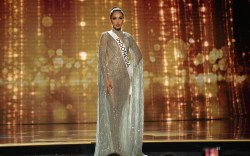 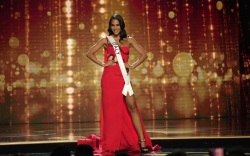 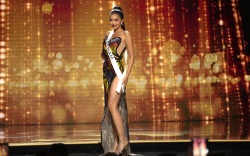 The 28-year-old model wore a bright orange one-piece swimsuit that featured a gaping cutout in the midsection. She completed her look with a shock-orange blotted cape that read “If Not Now, Then When?” as she extended it during her walk.

The model designed and dyed the cape herself. She finished it the morning before leaving for the global competition.

To accessorize, Gabriel opted for minimal silver-toned accessories with a thin bracelet and a pair of hoops. She kept her dark brown hair down in a softly curled style complimenting her glamorous makeup that featured a smokey eye and a nude lip.

The model completed the look by slipping on a pair of nude leather sandals. The heels featured a loosely woven design that filled the top of her foot. The almond-toe sandals added height to the look with a stiletto heel that was about 3 inches tall.

Even during the early stages of the competition, Gabriel has already become a fan favorite. She shined on stage during the 2023 National Costumes Competition wearing a NASA-inspired outfit that featured a moon-shaped crown with metallic boots. The model is originally from Houston and worked with designer Patrick Isorena to create this homage to her hometown’s Artemis missions, which plan to land the first woman and person of color on the Moon in 2024.

The Miss Universe 2023 pageant celebrates international beauty, as well as a range of humanitarian causes from its contestants. Held on Jan. 14 in New Orleans, the event will find contestants from at least 80 countries competing for this year’s crown: a diamond and blue sapphire creation by Mouawad Jewelry, titled “Force for Good.”