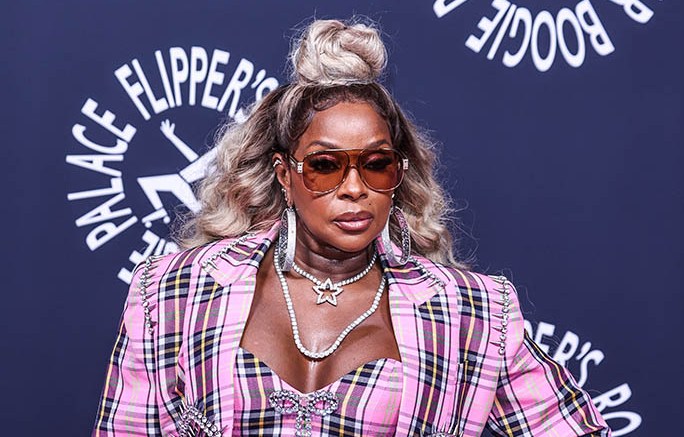 As seen on the Miami Funt Fest’s Instagram page, Blige showed up clad in a jumpsuit and metallic knee-high booties. The caption on the post read, “When you know you’re about to be winning all 2023! Who are you ready to see hit the stage next?”

Blige’s on-stage ensemble was comprised of a sparkling gray long-sleeve top with pronounced squared-off shoulders and daring round cutouts just above the “Family Affair” songstress’ hips. The dynamic top gave way to tailored bottoms featuring the same glittering geometric pattern as the top half of her jumpsuit.

When it came down to footwear, Blige impressively boogied down in silver knee-high boots. Beyond the recognizable silhouette, the footwear was anything but average. The style featured pointed toes and an appealing glossy iridescent finish that reflected the colors of the rainbow when worn under the bright stage lights. The boots’ wide fit and sleek silhouette transitioned into thin stiletto-style heels that ranged around 3 to 4 inches in height, giving the performer a little boost.

The entertainer has made a name for herself through her musical talents, and her love of fashion. Blige is known for experimenting with over-the-top style statements on and off the stage. On the red carpet, Blige has an affinity for high-fashion luxury brands like Roberto Cavalli, Gucci, Fendi, and many more.  As for footwear, the songstress loves boots, especially thigh-high silhouettes, with stiletto heels.