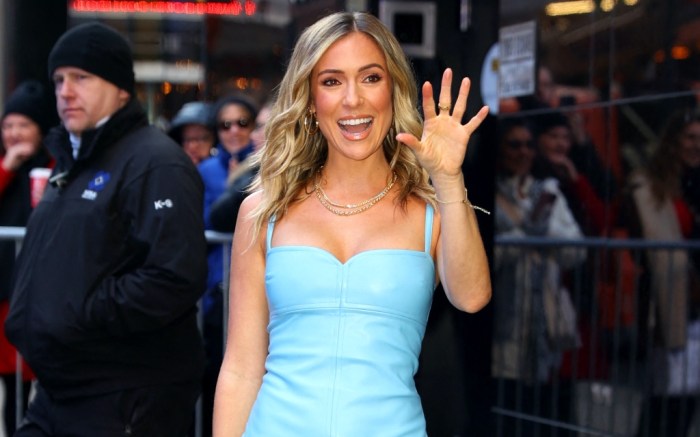 Kristin Cavallari looked effortlessly chic as she got ready for another segment of “Back To The Beach” which she co-hosts with Stephen Colleti. The podcast’s second season is now available to stream on Amazon Music, Apple, and Spotify.

To accessorize, Cavallari opted for gold jewelry featuring a watch, an assortment of rings, a pendant necklace and a pair of mini hoops. She kept her golden blond locks in a softly waved style complimenting her glowing makeup that featured winged eyeliner and a glossy nude lip.

The television personality completed the look by slipping into a pair of nude sandals, creating a barely-there illusion. The open-toe heels featured a crisscross strap that laid towards the front of the almond toe. The back of the sandals are hidden by the angle. She is most likely spotting a stiletto heel about 3 inches tall.

Cavallari often works with stylist Dani Michelle who is known for dressing other stars like Kendall Jenner, Hailey Bieber and Maren Morris.

The last time we saw the reality TV star was celebrating her 36th birthday wearing an all-white look featuring strappy sandals and a quilted Chanel bag.

For formal occasions, Cavallari often slips into strappy sandals and platform heels from labels like Gucci, Jimmy Choo and Bottega Veneta. Off-duty, she is usually seen in an assortment of boots, mules and sneakers from brands like Alexander McQueen. When she’s not stepping out in a formal style, Cavallari is most likely working on her clean skincare brand, Uncommon Beauty, or her jewelry line, Uncommon James.