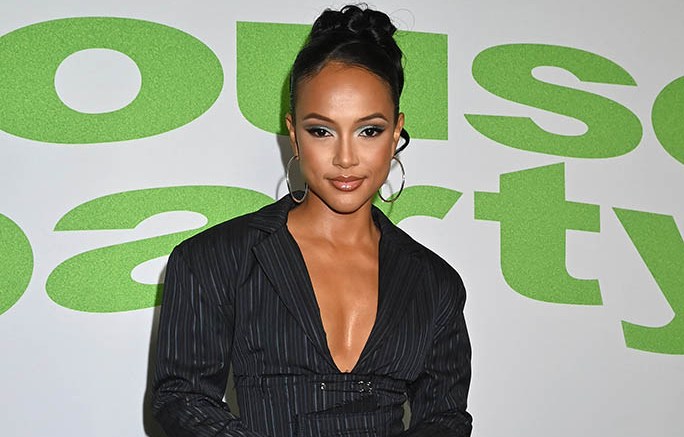 Karrueche Tran gave sharp suiting an upgrade for the “House Party” screening held at the TCL Chinese 6 Theatre in Hollywood, Calif. on Jan. 11. The remake of the 1990s cult classic film follows two freshly fired house cleaners and aspiring club promoters who decide to host the party of the year at Lebron James exclusive mansion.

For the event, Tran donned a black pinstripe ensemble that included a fitted blazer and matching baggy low-rise trousers. The Emmy Award-winning actress wore an overcoat, which featured a plunging deep V-neckline, a pointy hemline and cutouts at the back.

The “Claws” star amped up her look with a 90s-inspired updo, oversized hoop earrings and a bevy of midi rings. For glam, Tran rounded out her look with a smokey eye, sharp winged eyeliner and a glossy neutral pout.

Completing the entertainer’s look was a pair of pointed-toe pumps. The silhouette peaked out underneath her pants leg and appeared to include stud accents at the front.

Pointy pumps remain as one of the most versatile and timeless shoe styles. The slip-on silhouette matches a variety of looks easily, while the construction proves both luxe and durable.

Tran has secured her spot as a bonafide style star by stepping out in edgy statement pieces, bold separates and printed activewear. The 34-year-old entertainer has a shoe wardrobe that consists of strappy and platform sandals from brands like Giuseppe Zanotti, Versace and Tom Ford. While off-duty, you will likely catch her in athletic sneakers by Nike and Yeezy, as well as low-top Puma sneakers.