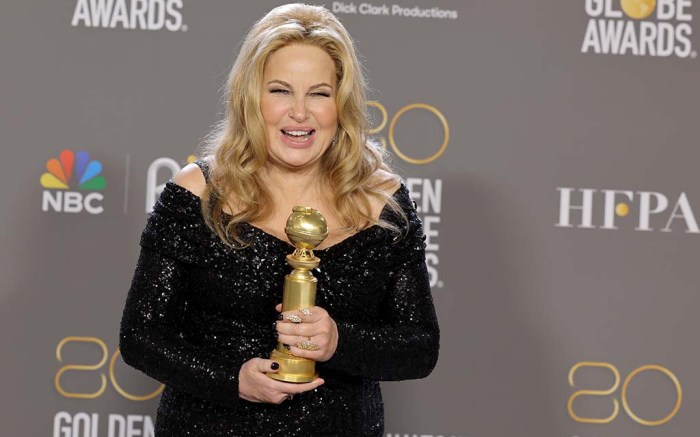 Before Jennifer Coolidge accepted her first-ever Golden Globe Award for Best Supporting Actress – Television Limited Series/Motion Picture for “The White Lotus,” she already had the audience in the palm of her hands.

Coolidge hit the stage earlier in the night to present the award for Best Supporting Actor in a TV musical/Comedy or Drama. But before that, she gave a hilarious nearly four-minute-long story about how she was asked to present in the first place and the stress that came with it.

“Somebody called Cara Bishop called me and said, ‘Jennifer, we would like you to present at the Golden Globes this year,’” Coolidge remembered. “And I said, ‘Oh my God, that is such an honor, thank you so much. Yes, I would love to.’ And then I hung up on her. And then I thought about it for a little bit, and I just had a complete anxiety attack, and I got very, very nervous. And I thought, ‘I’m not doing this.’”

The actress said she then called Bishop back to decline because she’d trip or fall, or not be able to read the teleprompter. “There’s no way I am going to make it behind the curtain all the way to the podium without breaking my skull,” she explained. Bishop told her to slip on a pair of Crocs clog under her dress. “I said, ‘Are you kidding me? With my Dolce and Gabbana dress? All those crazy Italians will lose their minds!'”

Nevertheless, Coolidge skipped the Crocs and took to the podium wearing a pair of Christian Louboutin black satin Pigalle Follies pumps paired with her sparkling, long-sleeved Dolce and Gabbana gown.