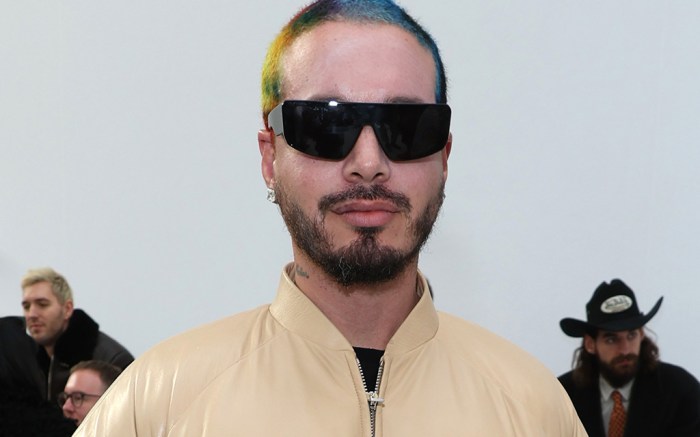 Opting for a neutral color pallet, Balvin sat front row clad in a floor-length nude leather puffer jacket with an exaggerated silhouette, the style ballooning out, creating a plush appearance. The style is akin to the brands viral padded leather bomber jacket, which also features an almost inflated look seen on the likes of Taylor Russel and Lori Harvey, among other stars.

Underneath the all encompassing outerwear, Balvin appeared to be wearing black slacks and a black tee, both garments thoroughly eclipsed by the “Mi Gente” singer’s jacket. Balvin sported black sunglasses and had his hair dyed all colors of the rainbow, his style signatures, both elements in turn further elevating his ensemble. On the accessories front, the Columbian rapper boasted diamond studs that gave a bit of shine to his look.

In a similar style to his jacket, Balvin’s shoes were also puffy and slipper-like, the nude low top style comprised of rounded toes and a chunky slip-on silhouette that resembled sneakers.

Aside from his bold attire, Balvin is well-known within the fashion industry for his numerous brand collaborations. One of the musician’s most recent fashion endeavors was the release of his streetwear collection, created with Miller Lite, titled BodegaWear. Balvin has also launched collaborations with Jordan Brand and Guess Originals.