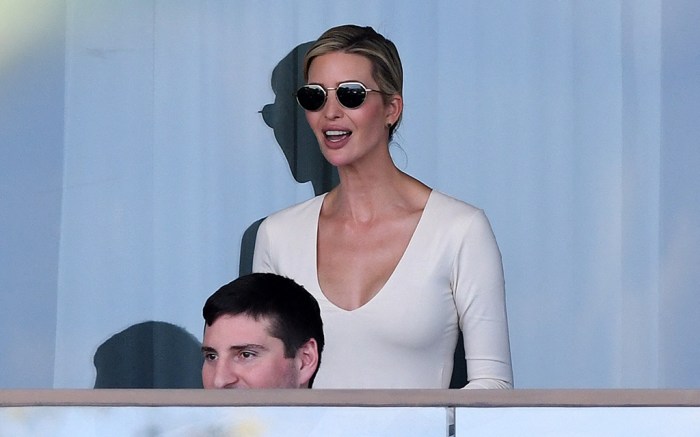 Ivanka Trump was casually dressed for a sunny day in Miami today. She was photographed out on her balcony with her husband, Jared Kushner, at their apartment.

Trump lounged in a white long-sleeve tee. The style was tucked into a pair of matching pants that featured a large belt in the ongoing color scheme of her look.

As for finishing touches, the former presidential advisor sported black sunnies with thin gold rims and wore her blond locks in a simple ponytail. When it came to footwear, Trump’s shoes could not be seen.

Trump’s shoe style typically veers into the versatile route, with a range of single-tone pointed-toe pumps from brands including Manolo Blahnik. Off-duty, she can also be seen in flats, thong and wedge sandals by Gianvito Rossi, Tkees and Aquazzura. Her casual shoes also include sneakers by APL, Mizuno and New Balance.

After departing Washington, D.C., in January 2021, Trump and her family began residing in Miami. The former footwear, apparel and accessories designer left the nation’s capital after the end of her father, President Donald Trump’s term in office.