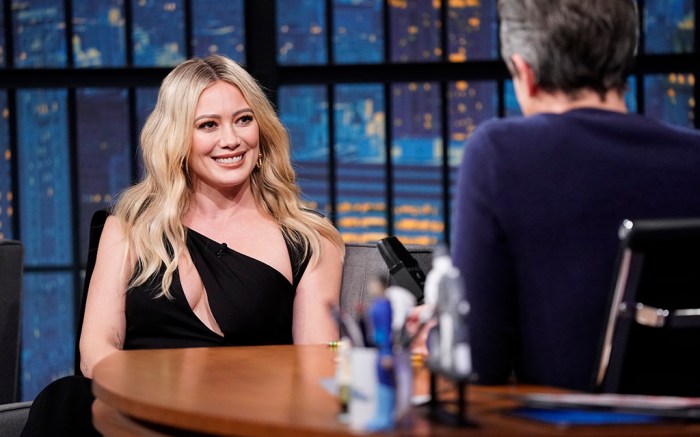 Hilary Duff appeared on the latest episode of “Late Night with Seth Meyers,” which aired yesterday. Duff spoke about being a mother to three children and her work on “How I Met Your Father.”

Duff’s talk show appearance saw the star clad in a sleeveless maxi dress. The sleek garment featured an asymmetrical neckline with cape-like detailing down her back and a tailored bodycon fit. The bodice of the garment featured dynamic angular cutouts that offered her ensemble an edgy touch.

Opting for a sharp addition to her ensemble, Duff wore a pair of black pointed-toe pumps with secure ankle straps. The pair featured thin heels, around 3 to 4 inches, triangular toes and a sturdy construction that offered the “Lizzie McGuire” actress a more comfortable wearing experience. The shoe style is a classic beloved by many celebrities, Duff included.

For footwear, Duff’s style varies between contemporary and glamorous. The “Cinderella Story” star often wears platform sandals by Jimmy Choo and Prada on the red carpet, as well as pointed-toe pumps by Aquazzura, Andrea Wazen and Le Silla. Her daytime looks also feature ankle boots by Louboutin, Gucci and Tibi.

When off-duty, Duff can be spotted in comfortable mules and loafers from brands like Rejina Pyo, Proenza Schouler and Wandler, as well. Aside from her sharp shoe tastes, Duff has also dipped her toes into the fashion world over the years as a collaborator with Smash + Tess, DKNY Jeans and Kohl’s Candie’s brand – as well as launching her own teen line, Stuff by Hilary Duff, at Target from 2004-2009.