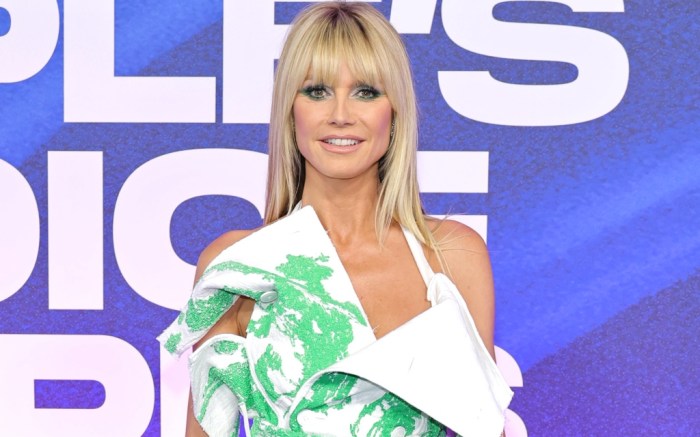 Heidi Klum flexed her modeling skills in a dramatic promo posted to her Instagram yesterday for the season 18 of “Germany’s Next Top Model,” airing on ProSieben starting Feb. 16.

The former Victoria’s Secret Angel was draped in a Hannez Nogi sheer dress in pastel shades. The flowy garment was delicately placed in order to cover the model up. The rest of the costume was splayed out behind her, with strips of colorful fabric creating an ethereal scenery for the photo.

Punctuated with a striking red manicure, Klum’s ensemble was simple but packed a heavy visual punch. As for her hair, the German star’s tresses were windswept and curled at the ends for maximum volume.

Although she did not have any on this time around, Klum’s shoe lineup usually includes sleek sandals and boots from brands like Valentino, The Row, Dries Van Noten and R13. When hitting red carpets and other formal events, she’s also been seen in bold pumps and mules from Gianvito Rossi, The Attico, Femme LA and more top brands. Klum has even founded her own lines of intimates, clothing, swimwear and perfumes with German grocery store Lidl.

In another post made to her Instagram this week, Klum fought off the cold alongside her brother-in-law Bill Kaulitz in a video. Both parties were dressed in cozy outerwear and chunky footwear, taking winter weather wear to the next level. Klum’s cold weather outfit consisted of a yellow ribbed minidress which she wore layered over black tights. Overtop it all, they wore a lengthy fur coat. She completed the look with square-toed black platforms.