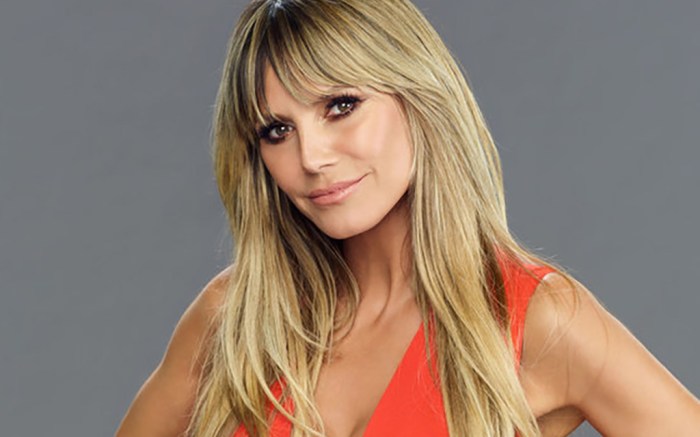 The former Victoria’s Secret Angel celebrated the coming of the new year with her husband, Tom Kaulitz, and brother-in-law Bill Kaulitz. On Instagram, Klum posted a sped-up video — set to the Black Eyed Peas’ “Pump It Louder” — showing a dancing moment between the three of them.

For the occasion, Klum suited up in an all-red ensemble consisting of a fitted blazer jacket and matching high-waisted tailored trousers. The model layered her blazer overtop a lingerie-inspired bodysuit with lace detailing.

Klum donned dramatic large black shades and a silver chain necklace adorned with a multitude of matching metal pendants. Getting festive, she hid her hair under a pointy gold party hat.

Lifting herself to new heights, Klum sported a pair of black platform boots that added a major boost to the 49-year-old’s look. The platform pair featured chunky soles, suede uppers, a bulky silhouette, and towering block heels reaching around 5 inches in height.

Klum’s recent shoe lineup has included sleek sandals and boots from brands like Valentino, The Row, Dries Van Noten and R13. When hitting red carpets and other formal events, she’s also been seen in bold pumps and mules from Gianvito Rossi, The Attico, Femme LA and more top brands. Klum has even founded her own lines of intimates, clothing, swimwear and perfumes with German grocery store Lidl.