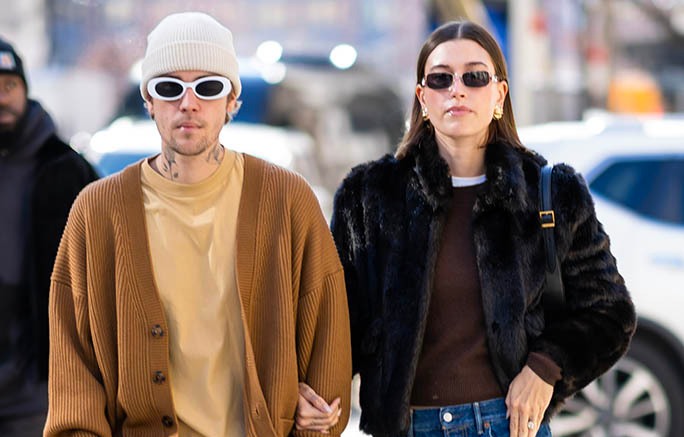 Hailey and Justin Bieber were a stylish duo during their latest outing. The couple was spotted strolling through New York City on Jan. 24.

Hailey was cozy-chic for the occasion, stepping out in a cropped black fuzzy coat. To keep warm during the chilly east coast temperatures, the supermodel layered her brown knit sweater with a white shirt underneath. She complemented both pieces with low-rise baggy denim jeans.

For accessories, Hailey added chunky gold hoop earrings, dark sunglasses and carried her essentials in a black shoulder bag. The Rhode Skin founder parted her fresh blunt cut bob in the middle and styled it straight. Sticking to a casual vibe, Hailey opted for a fresh face no makeup look and a glossy pout.

Completing the media personality’s ensemble was a pair of black pointy boots. The silhouette peaked out underneath her pangs legs and included an elongated triangular pointed-toe that was accented with a bow at the center.

Justin’s outfit gave major Kurt Cobain vibes. The Grammy Award-winning singer sported a chestnut cardigan and a simple tan T-shirt. He completed his look with baggy white jeans from Closed, a cream beanie and white Citra sunglasses by Oscar x Frank. Rounding out the “Peaches” musician’s look was a pair of blue sneakers.

Hailey and Justin are known for having a trendy fashion sense individually, but together they take it to a whole new level. The Biebers have continued to showcase their coordinated wardrobe at several red carpet events and while hitting the streets in Los Angeles. They have mastered the art of effortlessly cool couple style and have proved that they are sartorially in sync with pops of color, playful patterns, and retro ’90s-esque appeal.

PHOTOS: Scroll through the gallery to see more of the Bieber’s fashion moments.