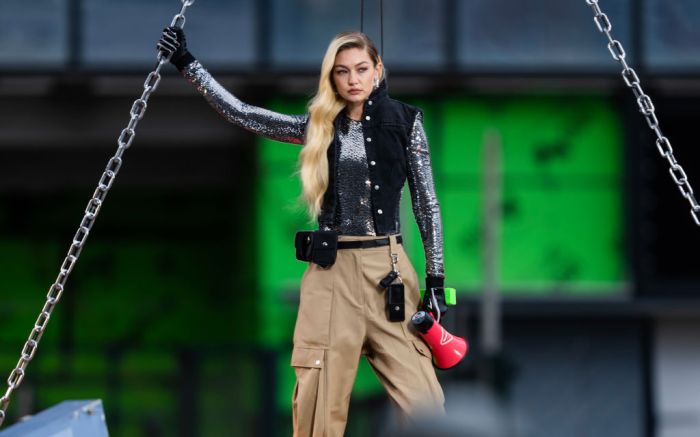 Gigi Hadid gave construction style a sharp finish during her latest appearance. The supermodel was spotted on the set of a Maybelline commercial in New York City on Jan. 17, while posing on a construction beam suspended by a crane.

Hadid appeared on the streets of Manhattan in a black cropped denim vest. The sleeveless piece featured a wide collar and buttons along the side. She complemented the lightweight separate with a sparkling silver long-sleeve top and tan cargo pants. The baggy bottoms had large pockets on the side and pleats near the hem.

To amp up her look, the 27-year-old media personality accessorized with chunky earrings and a black belt bag. For glam, Hadid went with pink eyeshadow and a neutral pout. She parted her hair on the side and styled it in soft sensual waves.

When it came down to the shoes, Hadid slipped into a pair of silver metallic pumps. The shoe style had a sharp, triangular pointed toe, a high counter at the back and sat atop a pointy stiletto heel ranging about 4 inches in height.