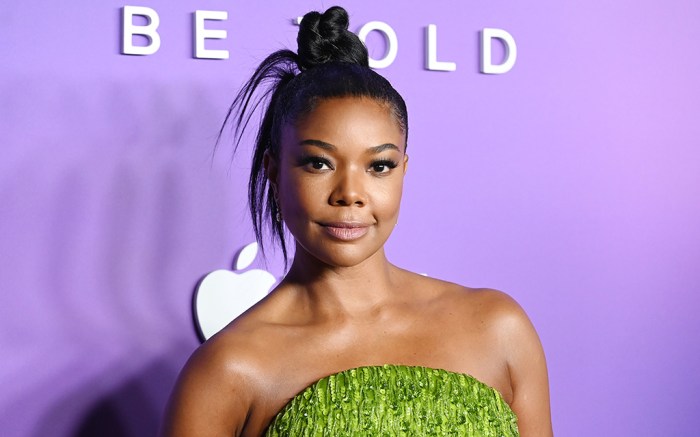 Union wore a beaded Prada gown and attended alongside her husband and former NBA star Dwyane Wade, who was dressed in a sharp Prada suit.

Union was clad in a strapless three-toned dress that featured rows upon rows of beads. The garment went from a lime green on top to a pink midsection and then black, which took up the majority of the gown.

The “Bring It On” actress mixed metals and stacked on chunky gold and silver rings from Norman Silverman to match the studs she’d sported. As for her hair, Union wore her dark brown locks gathered up into a bun, certain strands left out.

Although her shoes weren’t visible, the 50-year-old tends to gravitate towards a few frequented simplified styles for footwear. On and off the red carpet, Union can usually be found wearing sandals by Magda Butrym, By Far and Gia Couture’s collaboration with Rosie Huntington-Whiteley. She’s also known for wearing shoes from Paris Texas, Tamara Mellon and Tabitha Simmons. While off-duty, Union prefers athletic sneakers by Adidas, Reebok or Nike.

Apple TV’s “Truth Be Told” follows true crime podcaster Poppy Parnell is called to investigate the case of convicted killer Warren Cave, a man she incriminated after he murdered the father of two identical twins. Soon, Parnell must decide where the lines between guilty and innocent lie when Cave confesses to the fact that he was framed for the crime.