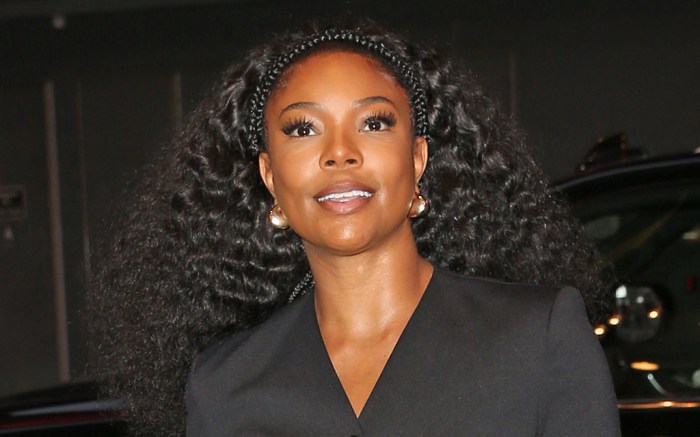 Gabrielle Union was spotted heading into CBS Studios in New York yesterday, throwing up a peace sign as she was photographed.

Union channeled the cool-girl style in a black blazer paired with a light-wash denim maxi skirt.

Union’s look was ultimately made casual thanks to the expert styling of each piece. The addition of denim also offered Union’s outfit a classic touch that juxtaposed the rigidity of her blazer.

For finishing touches, Union wore her curly dark tresses slicked back and out of her face and stacked on silver rings to match her sparkling silver studs.

Lifting herself to new heights, Union sported a pair of shiny black platform boots that added a major boost to her look. The platform pair featured chunky soles, black suede uppers and a bulky silhouette.

The platform shoe trend is one of the easiest styles to incorporate into any wardrobe. It is one of the most sought-after shoe styles, and can be found in various colorful iterations from top brands like Gucci, Valentino, and Burberry.

When it comes down to footwear, Union tends to gravitate towards a few frequented simplified styles. On and off the red carpet, Union can usually be found wearing sandals by Magda Butrym, By Far and Gia Couture’s collaboration with Rosie Huntington-Whiteley. She’s also known for wearing shoes from Paris Texas, Tamara Mellon and Tabitha Simmons. While off-duty, Union prefers athletic sneakers by Adidas, Reebok or Nike.