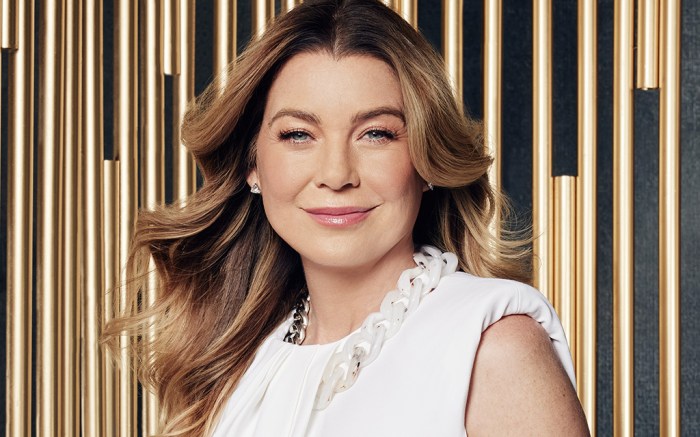 The first look at season 19 of ABC’s “Grey’s Anatomy” saw stars of the medical drama clad dramatically in formal wear. For the promo photoshoot, Ellen Pompeo took to Stella McCartney.

Surrounded by her fellow cast members, Pompeo posed in the white sleeveless Falabella chain top, which was tucked into a matt midi-length burgundy leather skirt in Garnet style.

On the accessories front, the 53-year-old fashionista took a minimalistic approach and styled a few statement rings on every other finger, a chunky silver chain necklace and shiny triangular diamond studs. As for her hair, Pompeo’s lengthy blond locks were parted down the middle and given volume with the addition of beachy curls.

Pompeo completed her outfit with height-boosting pointed-toe pumps in nude, giving her a few extra inches. When it comes to footwear, Pompeo’s taste is always versatile and classic. For formal occasions, the television doctor can often be found in pumps, ankle boots, wedges, and strappy sandal heels in neutral tones from Jimmy Choo or Alevi Milano among other top brands. On her days off, Pompeo usually steps out in athletic sneakers and “ugly” sandals, also colored in versatile hues.

As season 19 of “Grey’s Anatomy” begins, many fans have begun to come up with theories regarding the show’s trajectory. In turn, Pompeo often addresses those fan theories and more on her podcast “Tell Me” with Cadence13 studio. The actress launched her first episode on Sept. 29, where she shared in-depth conversations with celebrities. Pompeo is also an outspoken activist for issues including equal pay for women in Hollywood, social justice, voting rights and women’s rights. Pompeo is best known for her role in the drama for her portrayal of Dr. Meredith Grey.

PHOTOS: Check out the history behind high heels.