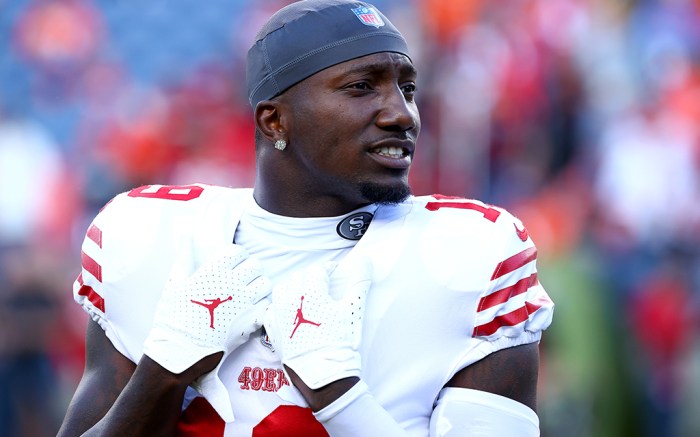 Deebo Samuel stepped out in style for the San Francisco 49ers game against the Dallas Cowboys for the NFL’s divisional round showdown on Jan. 22. The 49ers beat the Cowboys 19-12 at the Levis Stadium in Santa Clara, Calif.

Samuel opted for an interesting cleat choice during the match. The San Francisco 49ers wide receiver appeared on the field in custom Cactus Plant Flea Market-inspired Dunk Low cleats that were decorated with over 1,000 crystals. The bedazzled silhouette had crystals on the upper, outsole and near the heel and also included soft white laces.

Cleats are athletic shoes with plastic or metal studs on the sole designed to help the shoes grip the playing surface.

Samuel is known for making fashionable appearances in flashy outfits at NFL games. Prior to the 49ers game against the Cowboys on Sunday, the athlete arrived in a sharp Gucci suit that was accompanied with a turtleneck, matching satchel and leather gloves.

In September 2022, Samuel was announced as a Jordan Brand athlete. “To me, it’s surreal and truly special to hear I’m joining the family,” Samuel said in a statement. “As a kid, all I wanted were Js. Being a part of the Jordan Brand is something I’ve always wanted, and for it to be a reality is special to me. It’s a dream come true to be a Jordan Brand athlete and help carry this legacy forward to the next generation on and off the field.”