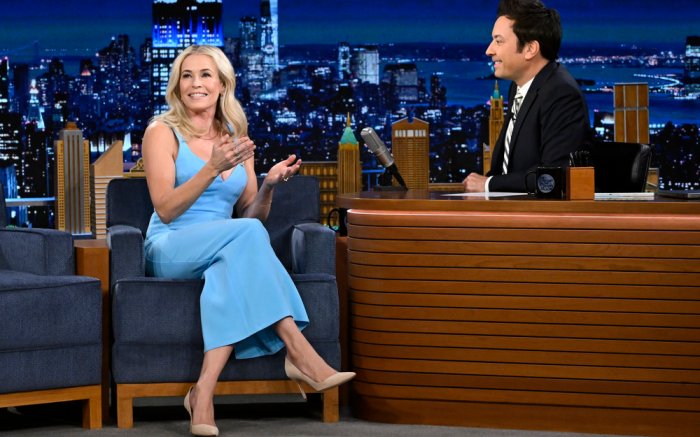 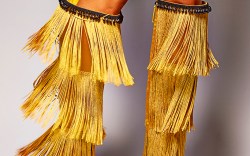 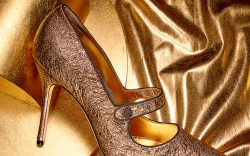 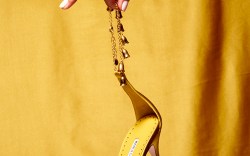 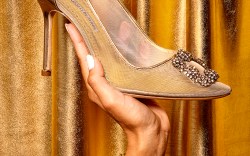 Chelsea Handler brightened the room as she visited “The Tonight Show Starring Jimmy Fallon” on Thursday night. The comedian discussed the revelations she found while spending time in Africa and her upcoming appearance as a guest host on “The Daily Show.”

The 47-year-old producer wore a light blue Alex Perry midi dress that featured a plunging neckline. The fitted silhouette is from the designer’s resort 2023 collection.

Handler opted for silver-toned jewelry with two necklaces, a dainty bracelet, an assortment of rings and a pair of hoops. She kept her platinum blond locks in a blown-out style complimenting her subtle makeup that featured a nude lip. Her look was created by hairstylist Ben Skervin and makeup artist Mia Jones. The beauty duo has also created looks for Michelle Yeoh, Amy Schumer and Claire Foy.

To complete the look, the “This Means War” actress slipped into a pair of nude Manolo Blahnik pumps. The leather heels featured a sleek silhouette that extended into a pointed toe. The pumps brought height to the look with a stiletto heel that was about 3 inches tall. The BB pumps are a timeless style that continues to be a fan favorite among the designer’s collections.

Handler was styled by Molly Levin who has also worked with Sharon Osbourne, Caitlin Thompson and Tiffani Theissen.

Whether she’s making a red carpet appearance or taking the stage on a stand-up tour, Handler tends to gravitate towards sophisticated and chic styles. The comedian is often seen in neutral jumpsuits or a patterned blouse. Handler has a wide shoe closet filled with platforms and pumps with intricate embroideries and bright embellishments. Throughout her successful entertainment career, the actress has also starred in many campaigns including Stella McCartney’s fall 2016 lingerie campaign for Breast Cancer Awareness. She recently made an appearance in Kim Kardashian’s SKIMS Bra campaign alongside Becky G, Brooke Shields and Cassie.