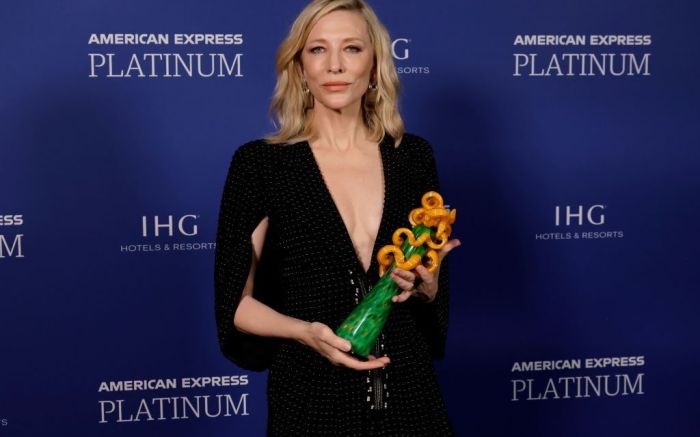 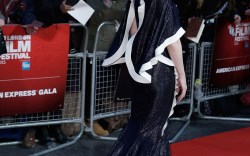 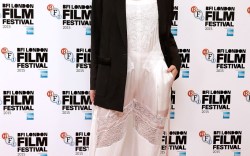 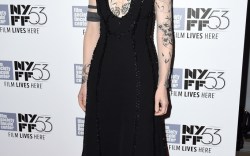 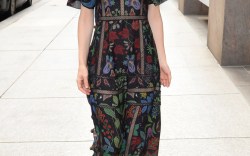 The “Don’t Look Up” actress posed in a black embellished jumpsuit with cape sleeves. The fitted silhouette featured a plunging neckline that cascaded into a line of silver sequins.

Blanchett kept the attention on the textured jumpsuit with minimal accessories opting for a simple pair of squared hoops and a silver-toned ring. She kept her bright blond bob in a softly waved style complimenting her minimal makeup that featured a light pink lip. Her glamorous look was created by makeup artist Mary Greenwell and hairstylist Adir Abergel. The beauty duo has created looks on various stars like Sarah Paulson, Jennifer Garner and Elizabeth Hurley.

The actress completed the look by slipping into a pair of black leather Le Silla pumps. The heels featured a sleek silhouette that was finished with a pointed toe. The pumps added height to the look with a stiletto heel that was about 4 inches tall.

As usual, Blanchett was styled by Elizabeth Stewart who also works with Zoey Deutch, Julia Roberts, and Jessica Chastain.

The Academy Award-winning actress is known for her sophisticated style choices. She has been seen on numerous occasions wearing sleek blazers with a chic blouse. She is often seen in boots, mules, and pumps sporting a sleek silhouette like the ones she paired this look with. Her closet is filled with various styles from designer labels like Hogan, Sergio Rossi and Stuart Weitzman.