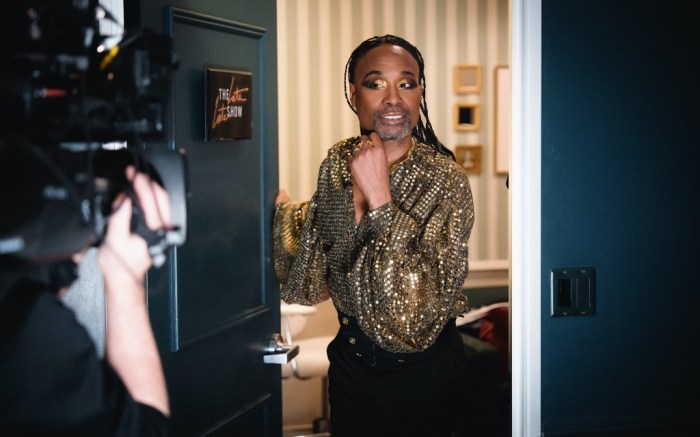 Billy Porter took a metallic approach to his style while hitting the late-night circuit.

The two-time Tony Award-winning actor appeared on “The Late Late Show with James Corden” on Tuesday night. On the late-night show, Porter talked about how directing has allowed him to help tell stories about black, queer individuals. He was joined by actress Andie MacDowell.

For his appearance, Porter wore a shimmery top from Helen Anthony. Styled by Ty Hunter and Colin Anderson, he wore a gold sequin long-sleeve top with a v-neck and billowing sleeves. He paired the top with black trousers. He added gold jewelry including a statement necklace and rings from Vitaly.

The actor got a boost from his footwear. He wore black patent leather boots from Jimmy Choo. The shoes featured a rounded toe and a thick block heel that reached at least 5 inches with the platform base.

When it comes to the “POSE” star’s style, it’s nothing short of breathtaking and full of statement-making pieces. Whether it’s a bright pink Christian Siriano tuxedo suit dress amalgamation or a pair of larger-than-life gold wings, you can depend on this Pittsburg native to bring it every time. Porter gravitates towards the camp aesthetic as he usually pushes gender-dressing boundaries.