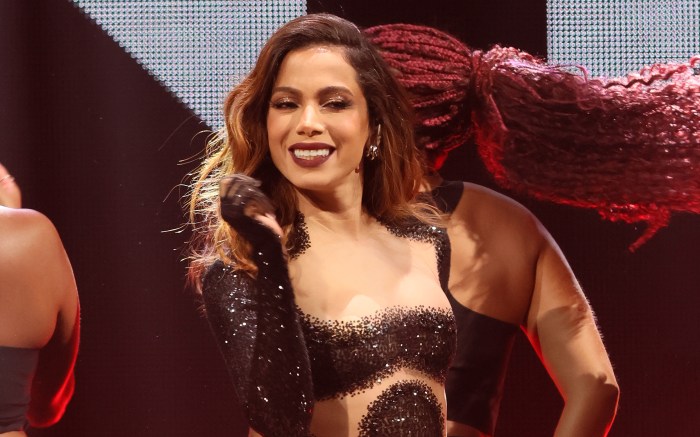 Anitta sat down for an interview with Billboard. The Brazilian singer spoke to the publication about her first Grammy nomination for Best New Artist, finding success in the American music scene, and teased some upcoming music — and she did all while wearing an effortlessly chic ensemble with gilded heels.

The “Envolver” singer wore a sleek graphic long-sleeve top that was slightly cropped for a more daring fit. The style gave off a faux-denim look and was lined with gold studs. On bottom, Anitta wore khaki-colored high-waisted trousers with a boxy, oversized fit and large pockets.

Although her outfit is simple, the styling effectively touches on Anitta’s personal aesthetics, keeping in mind that the award-winning star is a fan of dramatic silhouettes.

The star wore ombre locks down and parted down the middle, the ends given body and movement with loose waves. As for her makeup, Anitta’s look was bronzy, matching the neutral tones in her ensemble.

Adding some extra bling to her look, the singer strapped on gold “Intrigo Strap” sandal heels from Giuseppe Zanotti with a shiny chromatic finish and thick secure straps.

The 3 to 4-inch heels worn offered the performer a boost, if only slightly, lengthening her silhouette. The shoes, along with their silver counterpart, are a closet staple for many thanks to their endless versatility, Anitta included.