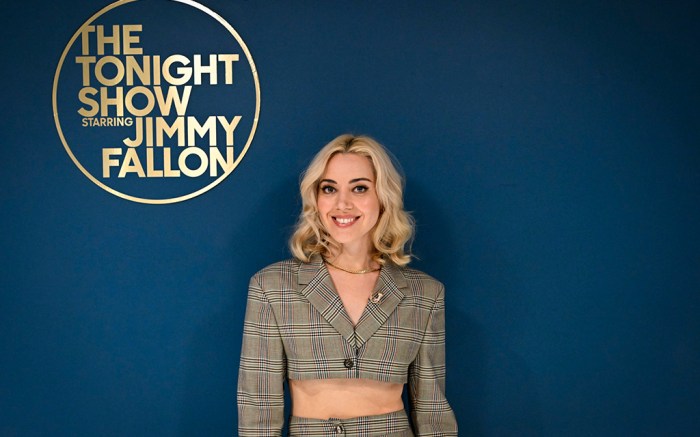 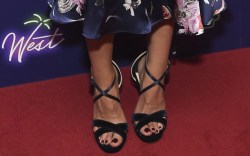 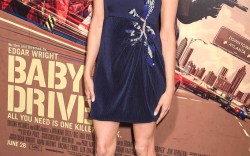 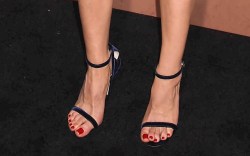 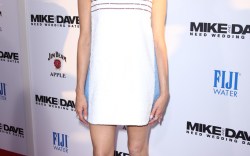 Aubrey Plaza sat down for an interview on the latest episode of NBC’s “The Tonight Show Starring Jimmy Fallon,” which aired yesterday. Plaza spoke about interning in the “Saturday Night Live” set design department and starring in the second season of HBO’s “The White Lotus” — all while wearing a Y2K take on power suiting.

Plaza’s ensemble was comprised of a cropped plaid blazer top which was partnered with a pair of matching high-waisted trousers with a baggy fit, embracing two popular silhouettes from the 2000s that have been trending in the past year.

On the accessories front, the “Ingrid Goes West” actress wore primarily gold jewelry taking shape in the form of a few chunky rings and a shining chain necklace. As for her hair, Plaza wore her shaggy bleach-blond tresses in loose curls.

Opting for a sharp addition to her ensemble, Plaza sported a pair of glossy nude pointed-toe pumps. The neutral variety featured thin heels, around 3 to 4 inches, triangular toes, and a sturdy construction that offered the “Parks and Recreation” star a more comfortable experience. The shoe style is a classic beloved by many celebrities, Plaza included.

Plaza’s shoe style is sleek and sharp. On the red carpet, the “Parks & Recreation” actress can be seen in neutral and colorful heeled pumps and sandals from brands including Christian Louboutin, Sophia Webster, Jimmy Choo and Brian Atwood; she’s even ventured out in Thom Browne’s heeled Oxfords, as well. When off-duty, Plaza can bee seen in low-top white sneakers, including affordable pairs from Feiyue. The actress has also become an emerging figure in the fashion industry, attending and walking in runway shows for Opening Ceremony and Moschino over the years.

PHOTOS: Click through the gallery to see how Aubrey Plaza styles other sandal heels.