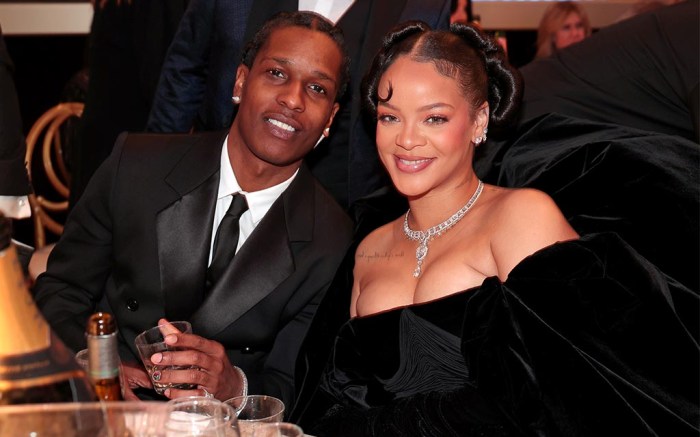 Rihanna brought her signature slick style to the red carpet forthe 2023 Golden Globes. The singer is nominated this evening for Best Original Song for “Lift Me Up” from “Black Panther: Wakanda Forever,” alongside Ludwig Göransson, Ryan Coogler and Temilade Openiyi.

While arriving to the event at The Beverly Hilton in Beverly Hills with A$AP Rocky, the Grammy Award-winning star wore a sweeping black velvet gown — a custom haute couture design from Schiaparelli. Designed by Daniel Roseberry, the musician’s ensemble featured a bustier silhouette with a flowing skirt and voluminous stole crafted from bonded silk velvet. The dynamic piece was paired with a diamond statement drop necklace and layered stud and crawler earrings for a maximalist appearance.

Finishing her attire was Roger Vivier’s Viv Pocket Strass Cube clutch, a $2,375 black velvet pouch with a drawstring opening and crystal-trimmed base. Accenting the piece was Vivier’s signature crystal straps buckle for an elegant finish.

When it came to footwear, Rihanna opted to sharply finish her look in a set of sleek sandals from Giuseppe Zanotti. Her $950 Indiigo Strap style featured glossy black patent fabric uppers, crafted into a heeled sandal with thin counters, buckled ankle straps and curved toe straps. Giving the classic silhouette a dynamic edge were 4.1-inch stiletto heels, as well as thin leather soles cast in a triangular shape akin to a pointed-toe pump. The set brought a sharp finish to her ensemble, while remaining rebellious in its slick take on a classic heeled sandal.

😍 Rihanna is at the #GoldenGlobes pic.twitter.com/l4gZE5WXLB

The star’s entrance notably came prior to her viral upcoming performance at the 2023 Super Bowl, which will air on Feb. 12.