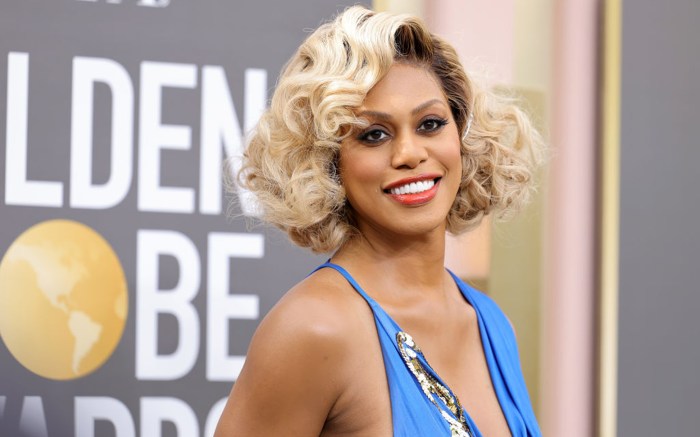 Laverne Cox was a vision in gold and blue for her appearance on the red carpet hosting this year’s “Live From E!: Golden Globes.”

Prior to the award ceremony, hosted by Jerrod Carmichael, Laverne and co-host Loni Love are covering the to-be-seen looks and catching exclusive interviews with Hollywood’s biggest stars.

Arriving to the Golden Globes red carpet, Cox channeled old-Hollywood glamour in a gorgeous blue and gold vintage John Galliano dress from the spring 2007 ready-to-wear collection, which was inspired by the classic movie star style.

The dress featured intricate gold sequin detailing from chest to knee and a slightly tailing hemline draping to the floor. The silhouette had a combo of one spaghetti strap and one wide strap that led into a v-shaped neckline.

The “Orange Is The New Black” actress accessorized the dress simply with several Fred Leighton and Kwiat bracelets. Cox’s hair was styled in a dirty-blond bob with old Hollywood-style waves and a layered side part. Cox kept the makeup and nails glam and simple with a brown smokey eye, arched brows, a soft-red lip and an elegant baby-blue tipped manicure.

Although her shoes weren’t visible due to the hem of the dress, Cox likely slipped on a pair of pumps or stiletto sandals to elevate her look.

The Golden Globes honor the top film and television performances of the past year. This year’s event, held at the Beverly Hilton in Beverly Hills, will be hosted by comedian Jerrod Carmichael. The occasion includes a star-studded list of nominees, including Zendaya, Viola Davis, Austin Butler, Jennifer Coolidge, Michelle Yeoh and Selena Gomez, among numerous others. This year’s Globes will notably be the first held in-person since 2021 and will include a pre-show hosted and streamed online by Variety.