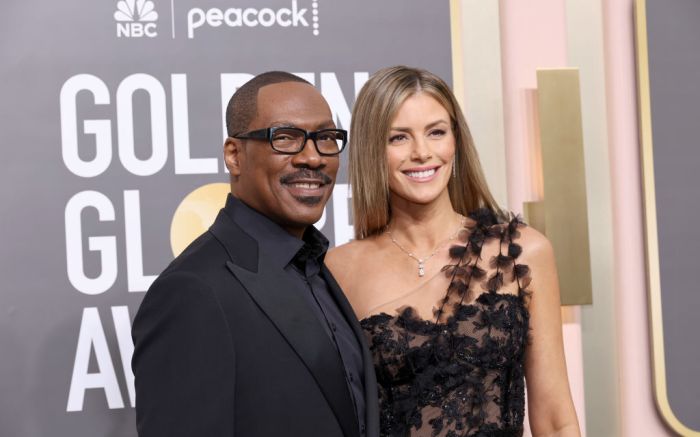 Tonight marks the 80th year of the Golden Globes Awards and all the celebrities came dressed to impress including Eddie Murphy and his fiancee Paige Butcher.

The two posed on the red carpet in coordinated head-to-toe black ensembles. Murphy served up a dapper look in a classic black suit with a black button-down while Butcher slipped on a floral embellished gown by Marchesa designed with a one-shoulder neckline and illusion tulle atop a brown bodice and skirt.

They both opted for minimal accessories as Murphy donned a pair of black glasses and Butcher donned a simple silver necklace with similar dangling earrings.

On the comedian’s feet was a pair of leather loafers that brought the look to completion. This style has been a go-to staple for Murphy since the 80s.

As for the Australian actress, her hidden heels were likely strappy sandals as Butcher often straps into this silhouette like she did for last year’s Golden Globes.