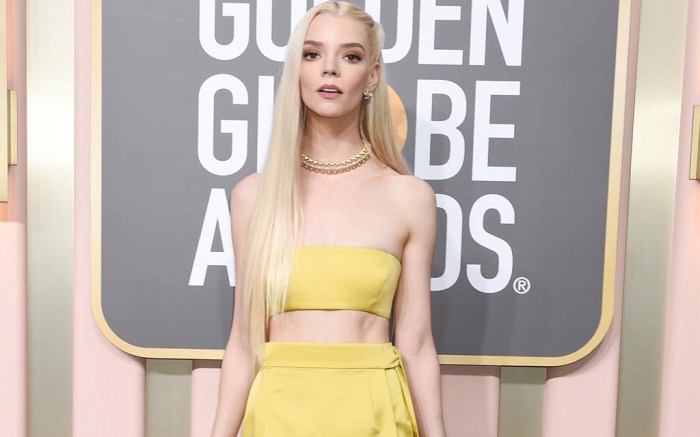 Anya Taylor-Joy brought vibrant color to the 2023 Golden Globes tonight. The actress is nominated at this evening’s ceremony for Best Actress in a Motion Picture – Musical or Comedy for her role in “The Menu.”

While hitting the red carpet at The Beverly Hilton in Beverly Hills, Calif., the Gotham Independent Film Award-winning star posed in a sharp Dior outfit. Her two-piece ensemble featured a satin texture across a high-waisted lemon yellow maxi skirt and strapless crop top. Both were laced with wide-stripped knotted bows, giving the set a romantic edge.

Taylor-Joy’s outfit was finished with a gold necklace, post earrings, thin rings and a set of matching bangles, all studded with diamonds.

When it came to footwear, Joy opted to slip on a pair of heeled sandals. Her style included an open-toed silhouette, punctuated by thin toe straps covered in sparkling crystals. Though the bejeweled set couldn’t be fully seen, stiletto heels totaling 3 to 4 inches in height finished the style within its traditional shape.