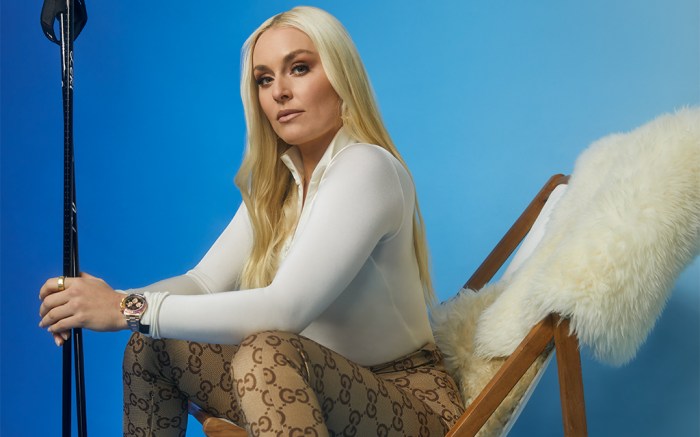 From appearing in Thom Browne’s virtual fall ’22 presentation to gracing the front row of Gucci’s Love Parade event in November, former pro skier Lindsey Vonn has been making the most of her time post-retirement, getting more closely acquainted with the fashion world.

And she put her sartorial skills on full display in a recent cover shoot for the latest issue of FN, out on Jan. 24.

In this exclusive cover image, Vonn, who was photographed by Sage East, can be seen modeling a coveted pair of skin-hugging boot leggings from the Gucci and Balenciaga Hacker Project (which hit runways in April 2021 for Gucci’s 100th anniversary “Aria” collection), along with a white Wolford bodysuit, which is part of her latest Legacy Collection with Head Sportswear.

The look is an elevated interpretation of the après-ski aesthetic, inspired by the sports star’s legendary career on the slopes and her inspiring next chapter as an entrepreneur, designer and investor.

In between posing for snaps, Vonn sat down with FN to discuss her latest projects, including her new memoir, “Rise,” which debuted today, and such topics as mental health, fitness and bringing more equity to the sports world. (Check out the Jan. 24 issue of FN for the full story.)

She also shared insight into her love for fashion.

In particular, Vonn confessed to a real fondness for the House of Gucci. “My favorite pair of shoes living in my closet right now would be a pair of Gucci winter boots. They have this floral pattern with a cool strap. Epic. Wear them any time.”

And she also counts Gucci boots among her go-to shoes for winter dressing and date nights.

Throughout her more than 20 years in competition, Vonn helped to shape a modern image of women in sports, one that embraced femininity and even sex appeal. As she recalls in her memoir, she drew criticism from fellow skiers when she began wearing makeup in competition and when she posed for the Sports Illustrated Swimsuit Issue.

“Everyone, athletes included, should wear whatever makes them feel good,” she writes in “Rise.” “I never set out to make a statement with it, but I do think that my racing in makeup helped change the public’s perspective on how an athlete can look.”

She’s bringing that same powerful vision to her newest projects, including the Legacy skiwear collection with Head.

“It’s got, I feel like, a very classic look — kind of ’70s,” Vonn told FN, citing the 1969 Robert Redford film “Downhill Racer” as a major inspiration. “That’s kind of my vision of what I want it to be — après-ski chic with incredible performance.” Another key influence for the collection is Princess Diana, who famously wore a Head ski suit and matching headband during royal family vacations in the 1980s.

But while Vonn is certainly a veteran of all types of ski gear, she said that her campaign with Thom Browne last fall ticked off a new first. “Shooting for Thom Browne was insane. I would say it was pretty cold and I was skiing in trousers and a skirt,” she recalled. “You know, I had never worn a skirt skiing before, but that was kind of a classic trend back in the day, when people were skiing on wooden skis. I mean, that was like a long time ago. But it’s retro, very cool, very chic.”

There were other aspects of the Thom Browne shoot that she enjoyed even more: “The couture gold jacket that I had on with the gold shoes were insane and I tried to steal them. But unfortunately, the jacket weighed about 75 pounds, so it wasn’t like it was easily, you know, hide-able.”

With contributions from Shannon Adducci